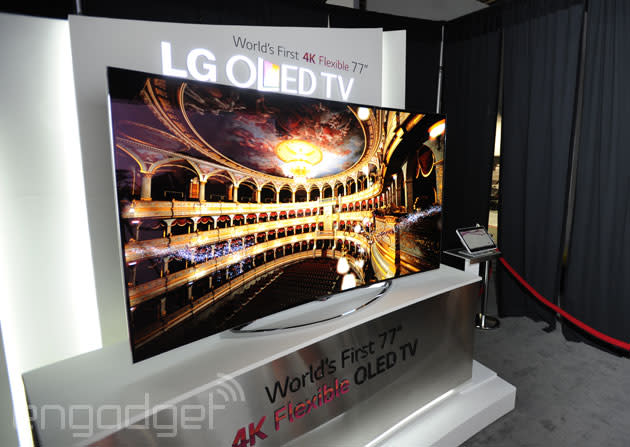 Samsung's probably kicking back right now, shades on and cocktail in hand, thinking it's pretty cool with its 85-inch HDTV prototype that can transform from flat to curved on a whim. LG, however, isn't at CES to watch Samsung score touchdowns from the sidelines, announcing its own 77-inch OLED set that goes from flat to curved on command. All LG needs now is a press conference, subsequent celebrity meltdown, and the two companies are even. Update: And we just got an exclusive first look. It's (unsurprisingly) gorgeous. LG's calling it the first bendable UHD OLED TV -- now remember, Samsung's wasn't (it looked like LED) and it was a touch larger at 85 inches, but it's a more slender mechanism that does the bending on the LG version. We were told it's a combination of "motors and gears" that makes it work, but we like how it maintains the finer silhouette. It's coming to the US sometime between the second half of this year and the start of 2015.

LG's been working on it for over a year and a half: it moves 7.5 cm to bend, making it eight centimeters narrower in total at full curve. You can also choose the degree of curvature -- in fact, LG told us that the tech can bend even further, but wouldn't tell us the limits here. Next up for the company: fully flexible TVs and transparent sets. Set your diaries for CES 2015 and watch the video after the break.

In this article: ces, ces2014, curvedoled, exclusive, hdpostcross, hdtv, lg, oled, video
All products recommended by Engadget are selected by our editorial team, independent of our parent company. Some of our stories include affiliate links. If you buy something through one of these links, we may earn an affiliate commission.