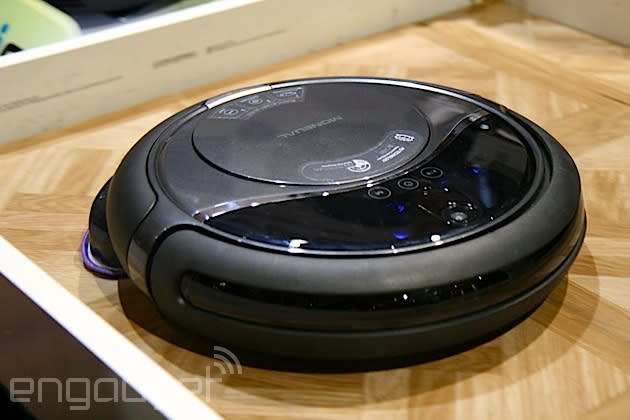 It's always nice to find out that a device is more than just a press render. We caught wind of this cool combo vacuum/mop several hours ago and lo and behold, here it is in the robotic flesh. Moneual was showing off its RYDIS H68 at CES Unveiled by mopping away magic marker statements off a linoleum floor with help from spilled wine (what real-world scenario might have led to that combination of factors, it's hard to say). Granted, it was a bit loud on the floor, but what struck us immediately about the H68 was just how quiet it was. It also did a pretty admirable job cleaning up the strange mess.

As noted earlier, this is the company's second vacuum/mop in a few months. The primary hardware difference between the two is the inclusion of a water tank, which sort of juts off the side of the device a bit (it's 25 percent larger than the competition's, according to the company), as opposed to the H67 which just has a pad on the bottom that you need to dampen. There's also a camera on the top, which apparently takes a reading of the room by projecting up to the ceiling, determining its best route. Oh, and pricing, which we didn't catch earlier, is $499, which puts it in the same ballpark as a Roomba or Scooba. That includes one wireless gate to keep it from going into the wrong room. In this article: ces2014, household, Moneual, mop, robot, RYDIS H68, vacuum
All products recommended by Engadget are selected by our editorial team, independent of our parent company. Some of our stories include affiliate links. If you buy something through one of these links, we may earn an affiliate commission.