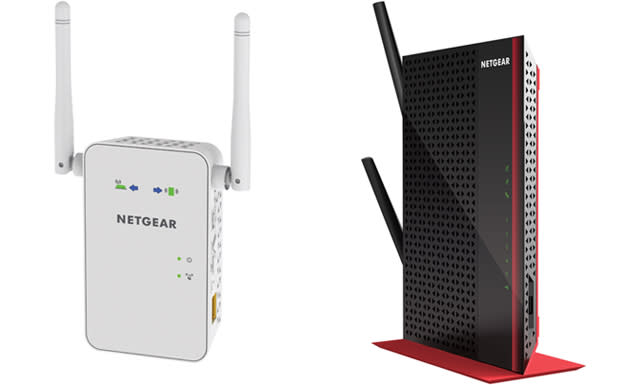 The 802.11ac WiFi standard is a spring chicken no longer, making us curious as to why there's a lack of range extenders supporting it -- barring Amped Wireless' efforts, of course. Looking to capitalize on the situation, Netgear's launching a pair of such extenders at CES, starting with the AC750 (aka the EX6100). This wall-plug model bounces up to 750 Mbps of dual-band WiFi to underserved areas, as well as playing host to one Ethernet port. The beefier AC1200 (aka EX6200) looks more like a router and packs five Ethernet ports, one USB 3.0 port, beamforming capabilities and can deliver up to 1,200 Mbps. Both are available now for $90 and $130, respectively, putting Amped Wireless' $200 option into fairly uncompetitive territory.

In this article: 802.11ac, ces, ces2014, ex6100, ex6200, netgear, RangeExtender, wifi, WifiRangeExtender
All products recommended by Engadget are selected by our editorial team, independent of our parent company. Some of our stories include affiliate links. If you buy something through one of these links, we may earn an affiliate commission.