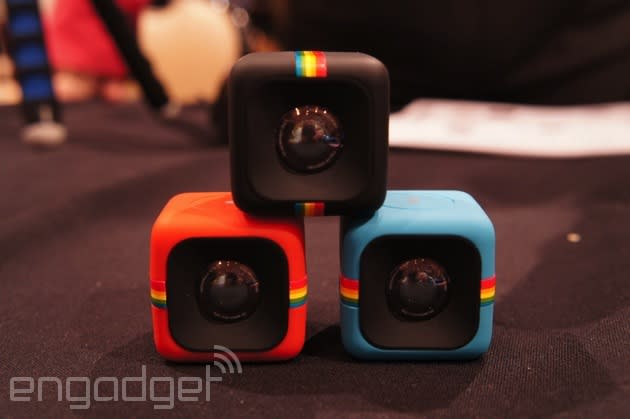 We were hoping to get our hands on Polaroid's Socialmatic camera, but unfortunately the company only had the shell of a prototype on hand. Luckily, though, we found something even more interesting when we stopped by the booth: the C3 action sports video camera.

It's a tiny cube of a thing -- a 35mm square, to be exact -- but its wide-angle lens captures 120 degrees of action, and the form factor lends itself well to going on the road. (It's also perfect for stacking -- but just for fun.) It's called an "action sports" camera, but we don't really see it holding up when you're snowboarding or biking. It is, however, waterproof for up to 2 meters. We also don't know how practical this guy is, given that WiFi isn't on board and you'll need to transfer photos and video via micro-SD. Its compact size, in other words, is the selling point.

Like the Socialmatic, the C3 is still in the prototype phase, though the models on hand seemed closer to final production, with the sensor built in. It has a soft-touch finish and feels very light. We like how the classic Polaroid rainbow carries over to this product, with versions in red, blue and black. There's a button on top, which you'll press to record video or snap a photo. The C3 's 5-megapixel cam shoots in 1,280 x 720 or 640 x 480 resolution -- we obviously can't speak to image quality quite yet, but we're intrigued to see how this gadget works when it debuts in the summer. It will cost $99, and a Polaroid rep told us there will be straps to make the C3 wearable, along with other accessories. Check out our hands-on below. In this article: action camera, actioncamera, c3, ces2014, polaroid, polaroid c3, polaroid c3 sports video camera, sportscamera, video
All products recommended by Engadget are selected by our editorial team, independent of our parent company. Some of our stories include affiliate links. If you buy something through one of these links, we may earn an affiliate commission.