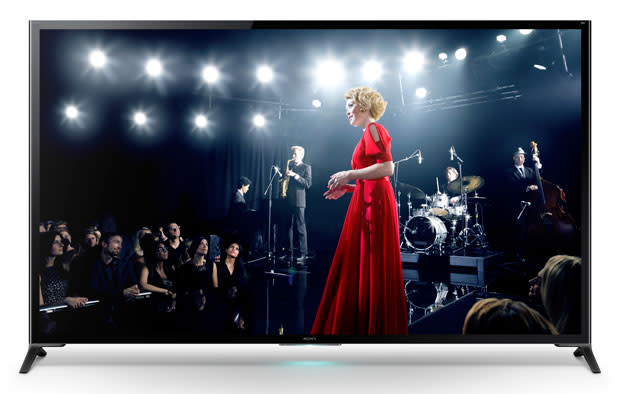 3D? Pah. 2014 is the year that 4K makes its first grand assault upon the mainstream. Naturally, Sony is one of the names leading the charge, and is bolstering the 4K support it added to the Video Unlimited service back in September. The company's new range of UHD TVs will now pull down 4K video from a variety of sources, but most importantly, will work with Netflix's forthcoming native 4K streaming. This year's flagship is the XBR-X950B, available to buy in 95- or 85-inch models, while the middle tier is now occupied by the XBR-900B, offering 79-, 65- or 55-inch units. For those of us who aren't on the roster of a Major League Baseball team, however, the company is also releasing an "entry level" XBR-X850B line, which can be snagged in 70-, 65-, 55- and 49-inch versions. Each one has the usual cluster of Sony technologies, including X-Reality Pro, Triluminos and ClearAudio+, as well as screen mirroring, NFC and built-in WiFi. All of them will arrive in spring, but there's no word, yet, on how much these will set you back, but we'd wager that the hardware isn't yet into the "impulse purchase" category just yet.

In this article: 4K, Bravia, CES 2014, hdpostcross, Netflix, sony, XBR-900B, XBR-X850B, XBR-X950B
All products recommended by Engadget are selected by our editorial team, independent of our parent company. Some of our stories include affiliate links. If you buy something through one of these links, we may earn an affiliate commission.