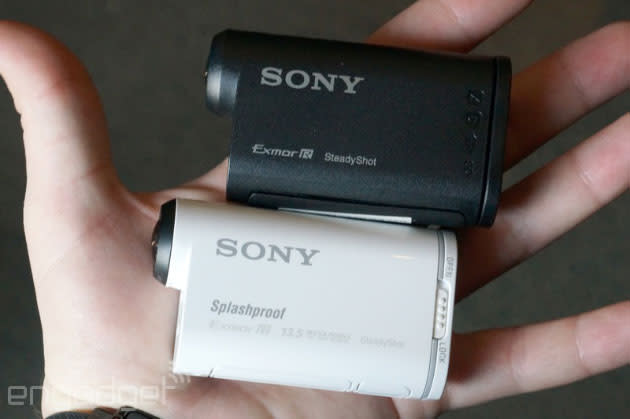 Sony's targeting amateur shooters and professionals alike with its new HDR-AS100V Action Cam. For consumers, the biggest addition here is the new splash-proof body, which lets you shoot in rain or snow without using the bundled (and relatively bulky) waterproof case. There are also "vast improvements in the optics," according to Sony, including an updated lens with a fixed 170-degree viewing angle (120 degrees with SteadyShot turned on), an 18-megapixel Exmor R CMOS sensor and new capture options, including 1080/24p, 720/120p or 720/240p video shooting and an ability to snap 13.5-megapixel stills. There's also an integrated stereo mic and an input jack, should you wish to add an external mic.

Professional shooters can take advantage of new time-code support when editing XAVC S footage with Vegas Pro, making it easy to merge clips from the Action Cam with content from a variety of other cameras. There's also a new option to shoot at 50 Mbps XAVC S, thanks to the new BIONZ X processor, and a record light up top that makes it easy to confirm that the camera's actually recording. Cosmetically, the AS100V looks nearly identical to its predecessor, with limited on-camera controls and a basic info readout on the right side and SD and Memory Stick Micro storage in the rear, along with USB, HDMI and a mic jack hidden behind a panel at the bottom of the cam.

The new AS100V will hit stores in March for $300, or $400 when bundled with Sony's live-view remote. The previous-gen AS30V will remain on the market, albeit with a TBA reduced price. A software update will add livestreaming and a high-speed continuous-shooting mode to both models this summer. 17
In this article: actioncam, cam, camera, cameras, ces, ces2014, hands-on, HDR-AS100V, sony
All products recommended by Engadget are selected by our editorial team, independent of our parent company. Some of our stories include affiliate links. If you buy something through one of these links, we may earn an affiliate commission.