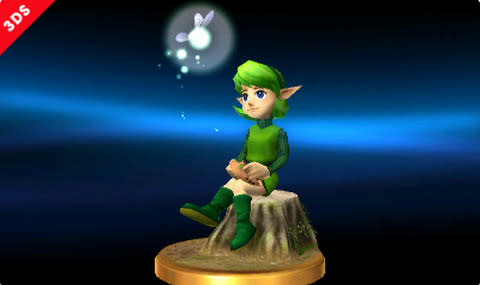 Super Smash Bros. series director Masahiro Sakurai announced via Miiverse that the upcoming Nintendo 3DS and Wii U versions of Super Smash Bros. will each feature unique unlockable trophies, giving players an incentive to play the game both at home and on the go.

Sakurai revealed that the 3DS version of Super Smash Bros. will feature character trophies taken from Nintendo's handheld games, while the Wii U edition's trophy set is largely inspired by console releases. The announcement further establishes the 3DS version of Super Smash Bros. as a tribute to Nintendo's portable heritage, as the company previously announced that "there will be more stages based on handheld games [in the 3DS version], while themed stages from home console games will be on Wii U."

While both Super Smash Bros. games will feature the same roster of playable characters, each version boasts its own unique graphical style and other distinctive elements, ruling out the possibility of cross-platform play. A release date has not been announced for either version.
In this article: 3ds, masahiro-sakurai, nintendo, super-smash-bros-2014, wii-u
All products recommended by Engadget are selected by our editorial team, independent of our parent company. Some of our stories include affiliate links. If you buy something through one of these links, we may earn an affiliate commission.