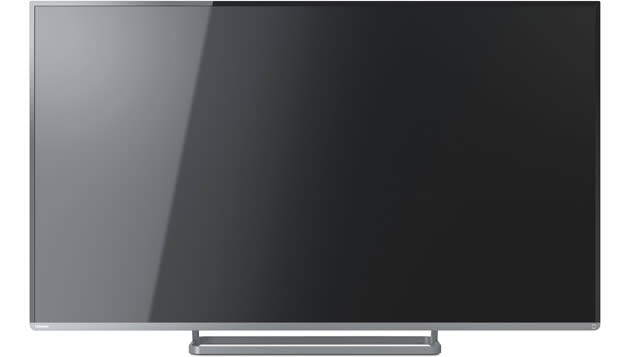 Toshiba knows how to shine in the 4K TV space when there's a sea of competitors -- by making brighter 4K TVs, of course. Its 2014 Ultra HD TV lineup (not yet pictured) centers on 58- and 65-inch Premier L9400U models that both have extra-bright "Radiance" LED panels. They similarly share a third-generation 4K video-scaling engine, a 240Hz refresh rate, DirecTV RVU support and voice control. If brightness isn't what you're looking for, there are more conventional alternatives. The 84-inch L9450U relies on more conventional local-dimming LEDs while preserving the rest of the L9400U's features, and the 50- and 58-inch L8400U sets cut costs through both their smaller sizes and 120Hz panels. All three TV lines are poised to ship this summer, although Toshiba isn't ready to commit to pricing.

The electronics giant is also launching a pair of next-generation Symbio set-top boxes, both of which combine Blu-ray with streaming media using a newly simplified, one-page interface that brings Smart TV Alliance app support. The BDX5500 leads the group with 4K upscaling and 3D playback, while the BDX3500 saves some cash by sticking to 2D. Toshiba doesn't yet have pricing for the new Symbio line, but it should grace store shelves in the first quarter of the year.

In this article: 4k, bdx3500, bdx5500, blu-ray, ces2014, hdpostcross, l8400u, l9400u, l9450u, rvu, streaming, symbio, television, toshiba, tv, ultrahd
All products recommended by Engadget are selected by our editorial team, independent of our parent company. Some of our stories include affiliate links. If you buy something through one of these links, we may earn an affiliate commission.