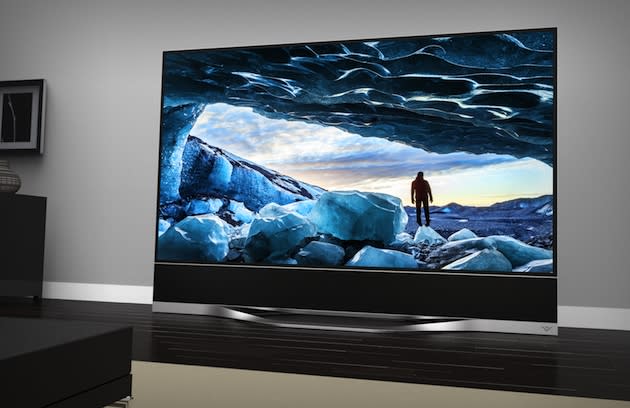 We took a peek at Vizio's CES 2014 booth and came away impressed with not only its current mainstream HDTV lines, but also what it's planning for the future. The current E- and M-series are rolling out now with features like smart apps (cribbed from its Co-Star LT platform) and local LED dimming backlighting that are usually reserved for higher-end HDTVs. It's also readying a number of new audio products, from those Android-packing Bluetooth speakers to its current soundbars and even an upcoming sound plate device that you can sit your TV on. Still, the models we think most will be the most interested in are Vizio's upcoming Ultra HD televisions.

The P-Series holds its mainstream approach, with 64 zones of LED backlighting and a built-in CPU with two CPU cores and four GPU cores in sizes of 50, 55, 60, 65 and 70 inches. The custom Vizio design handles all the processing and per-pixel tuning needed to work at that high resolution, and the TVs even support the latest wireless tech like 802.11ac, and 4K streaming from sources like Amazon and Netflix when it's available. Vizio's most striking assault however, is planned at the extreme high end with its Reference Series. Consisting of two models -- a 65- and 120-inch versions -- they promise all the features of the others, plus an upgraded 384 zones of local dimming, Dolby HDR tech for unprecedented lighting and color quality, and an integrated 5.1 soundbar (with wireless subwoofer). We don't have prices or release dates for Vizio's 4K-ready TV lineup yet, but the company reminds us of its groundbreaking pricing history. That's enough to have us interested and thinking these may be some of the first cheap Ultra HD TVs worth purchasing -- assuming they debut in the second half of the year as planned. In this article: 4k, ces, ces2014, dolby, hdpostcross, hdr, p-series, referenceseries, soundbar, soundplate, ultrahd, vizio, Vizio P-Series, Vizio Reference Series, vizo
All products recommended by Engadget are selected by our editorial team, independent of our parent company. Some of our stories include affiliate links. If you buy something through one of these links, we may earn an affiliate commission.