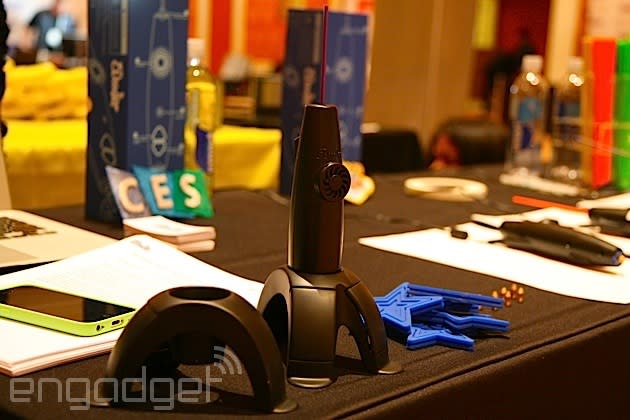 WobbleWorks' almost finished shipping Kickstarter backers their 3Doodler 3D-printing pens, and next month, post-crowdfunding pre-orders will begin to be filled. The company announced today a US retail launch later this year -- a "major retailer" in the UK is also on board, apparently -- but in addition to that, it showcased its first round of accessories for the device here at CES. While pricing and availability info elude us, we've seen a range of new tips for the pen, from different standard nozzle sizes to square and triangular heads, among others. They'll come neatly contained within a tool you'll need to swap them out, the design of which is still being finalized.

If your freehand 3Doodling is more Picasso than Monet, then look forward to the DoodleSuit, which looks like a cradle, but functions more like a computer mouse. Three legs stabilize the pen, and buttons on two of the legs tell it how fast you want heated plastic to come out of the tip. If you're still struggling to make pretty things, then perhaps you'd better let DoodleBlocks guide you. They're basically stencils for tracing uniform shapes, and although WobbleWorks only had a star to demo today, more are planned, including some that'll let you create elaborate 3D shapes, minimal skill required.

In this article: 3doodler, 3dprinter, 3dprinting, accessories, ces, ces2014, doodleblocks, doodlesuit, WobbleWorks
All products recommended by Engadget are selected by our editorial team, independent of our parent company. Some of our stories include affiliate links. If you buy something through one of these links, we may earn an affiliate commission.