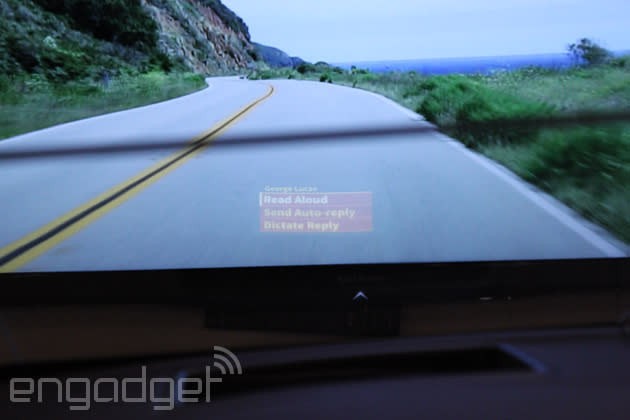 We've tracked Garmin's K2 since last year at CES and this year sees a HUD concept introduced into its navigation mix. In our conversation with Garmin, it seems that in large part this year's focus is on following NHTSA driver distraction guidelines. Interaction with the HUD is very simple as there are only three buttons on the steering column: a scroll wheel which is mounted in capacitive housing, a back button and a menu button. Each level of the menu is well thought out, and only requires a roll of the finger to get in or a tap of a button to hop back out of. Colors, fonts and general layout have all been chosen to work well in brightly lit, snow, dark and most other conditions you find yourself in while out driving making the task of peeking down at the HUD quick and simple. Of course, we've seen many similar setups, but Garmin's infotainment-focused offering adds a dimension of useful and quick interaction to the system that makes it much more compelling than a simple read out of speed, direction and time. We look forward to see this hit retail but in the meantime give the video a once over if you want to see s bit more. 19
In this article: auto, ces2014, Garmin, hands-on, hud, video
All products recommended by Engadget are selected by our editorial team, independent of our parent company. Some of our stories include affiliate links. If you buy something through one of these links, we may earn an affiliate commission.