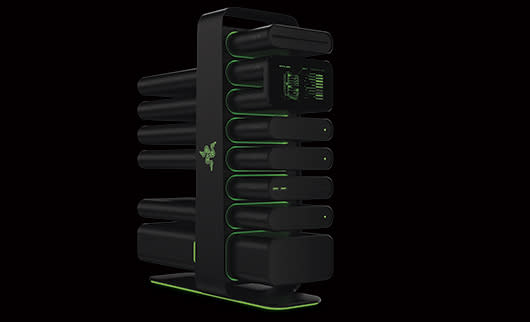 Tucked away in a shrouded corner of Razer's booth at CES 2014 lies Project Christine, a stackable, customizable PC that looks unlike any gaming machine you've ever seen.

The idea behind Project Christine is simple: Remove the hassle and expense of constantly upgrading a computer by making each of its crucial parts modular and self-contained. Instead of opening a tower and slotting more memory or a new graphics card into your computer, Project Christine allows users to simply snap a new module containing any desired upgrades on to their current configuration. As a result, Project Christine should have a far longer lifespan than conventional computers, as modules containing your desired upgrades can simply be swapped in as necessary.

Helpfully, Razer's design negates most of the configuration issues you'd encounter when building your own traditional PC. Project Christine isn't just physically modular, it also divides the motherboard into components which are spread across the system's various modules. Instead of having to match your new components to the specifications of your old motherboard, each new module includes all of the technology it needs to function, save the power it will draw from the rest of the system.

Each Project Christine module features a mineral oil cooling system which should come in handy, as Razer promises configurations of the device featuring up to four graphics cards aligned in a quad-SLI array as well as factory-overclocked components. Every module also comes equipped with noise cancelling insulation, preventing your fancy new gaming machine from driving you mad with incessant noise.

While Razer will be the sole manufacturer of Project Christine modules, the company is still debating which business model to adopt for this new take on the PC. "We're really looking at other models," Razer CEO Min-Liang Tan told Engadget. "Perhaps to say a subscription model of sorts, that we could interchange modules when they come in. Users don't have to worry about a huge bump every time there's new architecture out there."

Though Project Christine is still in the early stages of development, Tan hopes support for the idea will be strong enough to convince Razer to begin manufacturing modules at some point during 2014.
Show full PR text
RAZER RE-INVENTS GAMING DESKTOPS WITH THE WORLD'S MOST MODULAR PC CONCEPT DESIGN

LAS VEGAS (CES 2014) – Razer, the world leader in entertainment devices and software, today announced a concept of what promises to be the world's most modular gaming system, Project Christine.

The PC has traditionally been one of the most open platforms in all of technology. However, given the technical complexities of PC hardware, only the most hardcore enthusiasts have been able to take advantage of this openness to build, customize and continuously upgrade their PC desktop systems. The tremendous promise of the PC has remained underexploited by the vast majority of general consumers for more than 30 years, largely due to the convoluted hardware – knowing what does what, what works with what, and how to connect the pieces.

Project Christine is a revolutionary new concept design that will change the way users view PCs. It will allow any user to build and customize his or her PC in any configuration without any prior technical knowledge. Further, as new upgrades come to the market, the same PC can be easily and quickly upgraded without additional technical assistance and without the fear of incompatibility or obsolescence.

Project Christine's modular design allows users to easily build their PCs by allowing them to select and install modules on-the-fly, whether it's a CPU, GPU, or memory and storage configuration. The PCI-Express architecture of Project Christine automatically syncs components. Need more graphics processing power or storage? Easy – a user can slot-in additional graphics modules and add more storage by either swapping-out the existing storage drives or adding more modules. Equally exciting, Project Christine is able to run multiple operating systems that the user may require.

The modularity of Project Christine make it perpetually customizable, offering plug-and-play upgradability as new and improved technology evolves, ostensibly eliminating the need to replace entire systems. Modules connected to the PCI-Express backbone can be added in any order or combination, featuring up to quad-SLI graphics, multiple SSD and RAID storage components, I/O and even power supplies, ensuring maximum flexibility.

The cable-less design of each sealed module is entirely self-contained and features active liquid cooling and noise cancelation, which allows Razer to factory overclock components without voiding warranties, safely and quietly. The system also features a touch-screen LED display that indicates control and maintenance information.

"Project Christine is a new concept design that will revolutionize the way users view the traditional PC. This is the first gaming system that is able to keep pace with technology and could allow consumers to never buy another PC, or gaming system, again," says Min-Liang Tan, Razer co-founder, CEO and creative director. "We have a history of bringing incredibly innovative concept systems to market and it's fair to say that Project Christine is a very exciting new prospect for future development."

For more information, check out www.razerzone.com.


For more information about Project Christine, please visit www.razerzone.com/christine.
In this article: CES, ces-2014, gaming-pc, Min-Liang Tan, min-liang-tan, modular, modular-computer, modular-pc, pc, project-christine, razer
All products recommended by Engadget are selected by our editorial team, independent of our parent company. Some of our stories include affiliate links. If you buy something through one of these links, we may earn an affiliate commission.