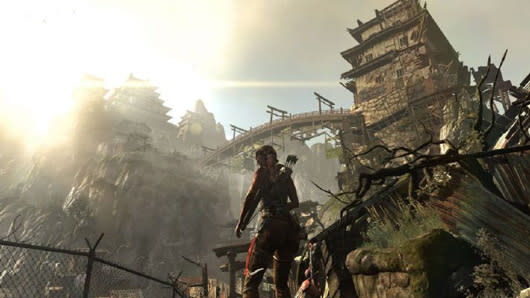 Crystal Dynamics has detailed the numerous improvements players can expect to see in the upcoming PlayStation 4 and Xbox One release of Tomb Raider: Definitive Edition, explaining that the new port is "a colossal effort, soaked in visual enhancements and technical optimizations."

The game will run at a native 1080p resolution on the PS4 and Xbox One, and will be bolstered by a "buttery framerate" throughout. The new port is bundled with all of the game's previously released multiplayer DLC, along with the bonus The Tomb of the Lost Adventurer add-on, six alternate outfits, and a collection of digital comic books and documentary featurettes.

Lara herself has also seen an upgrade for the upcoming port, as Crystal Dynamics has implemented a new head and face model for the game's misfortune-prone protagonist, along with subsurface scattering technology that results in more realistic skin glow.

While a handful of games released last year for the PlayStation 3 and Xbox 360 were available at a discounted rate for buyers who wished to upgrade to PS4 and Xbox One versions, Eidos notes that it will not offer a Definitive Edition discount for players who purchased a previous version of Tomb Raider on any platform. The company additionally revealed that Definitive Edition's upgrades are exclusive to current-gen consoles; an update for the Windows PC version of Tomb Raider is "not planned."

Tomb Raider: Definitive Edition will be priced at $59.99 when it launches in North America on January 28.
In this article: Crystal-Dynamics, eidos, microsoft, playstation, ps4, tomb-raider-2011, tomb-raider-2012, tomb-raider-2013, tomb-raider-definitive-edition, xbox-one
All products recommended by Engadget are selected by our editorial team, independent of our parent company. Some of our stories include affiliate links. If you buy something through one of these links, we may earn an affiliate commission.