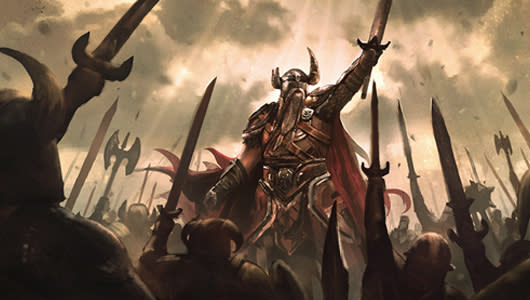 Curious about Elder Scrolls Online but stuck in the dark because the game is still, for some reason, blocked by a ridiculously limiting NDA despite being less than three months from launch? Today might be your lucky day. ZeniMax Online has announced that another round of Elder Scrolls Online beta keys have been sent out, so take a look at your email inbox to see if you've earned yourself a ticket into the party.

If you didn't get an invite, don't fret; ZeniMax will be sending out more in the near future. Don't forget to check your spam folder and Gmail's "Promotions" tab, just to be sure.

[Thanks to Mortis13th and Balsbigbrother for the tip!]
In this article: beta, beta-key, beta-test, beta-testing, bethesda, bethesda-softworks, bethsoft, daggerfall, elder-scrolls, elder-scrolls-online, eso, factions, invites, morrowind, oblivion, pvp, rvr, sandbox, skyrim, tamriel, tes, teso, testing, the-elder-scrolls, the-elder-scrolls-online, three-faction-pvp, three-way-pvp, zenimax, zenimax-media, zenimax-online, zenimax-online-studios
All products recommended by Engadget are selected by our editorial team, independent of our parent company. Some of our stories include affiliate links. If you buy something through one of these links, we may earn an affiliate commission.