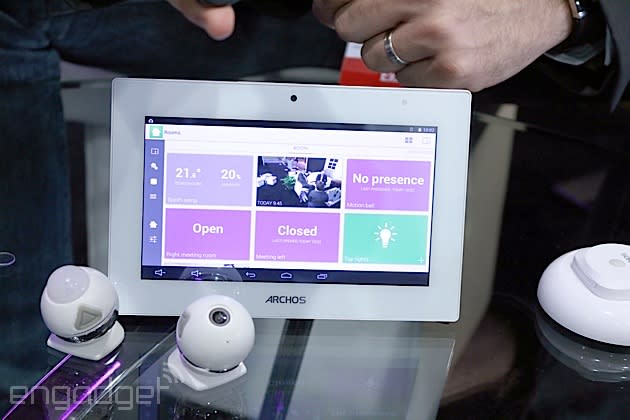 Yes, this is another post about the internet of things blorg -- you know, that terrible buzz phrase for this new and actually exciting era of connected gadgets. Except this time, it's brought to you by Archos. The French outfit's branching out from its traditional portfolio of Android smartphones and tablets with a new Smart Home solution -- an ecosystem that's similar to Smart Things. The platform, which Archos announced just prior to the new year, incorporates a tablet-like gateway and various sensors that users can place in and around their homes for remote monitoring.

Archos is gearing this whole system more toward convenience than security and its array of Bluetooth sensors proves this point. Smart Home revolves around Archos' gateway, a 7-inch tablet that gathers and manages a feed of all the data from its various Bluetooth sensors; sensors designed to monitor video, motion, weather and electricity. Though the initial $200 kit comes with just the gateway, one video camera and one motion sensor, users can go out and buy additional sensors piecemeal for anywhere from $14 - $50 (e.g., the weather sensor costs $30).

You may be worrying about the longevity of these sensors, but because Archos has done some work on the Bluetooth stack, battery life is expected to last from 18 months to two years. They're also water-resistant and feature replaceable batteries, so you can swap out when the charge starts to run low. Additionally, that bit of Bluetooth tinkering also means Archos' Smart Home system can maintain upwards of 30 individual device connections -- that's way more than traditional low energy Bluetooth.

We were only privy to a brief demo of the Smart Home app running on the gateway -- never fear, Android and iOS apps do exist -- but the premise is quite simple. The software allows users to set specific triggers based on sensor data to effect actions. So say the temperature in your car drops below freezing, a notification will be sent alerting you that it may be time to de-ice the Chevy, or salt the driveway. Again, it's all about convenience and users can tailor the system to automate their lives in myriad ways.

Archos intends to begin shipping the $200 Smart Home bundle -- which includes the gateway and two sensors (one for video, one for motion) -- in Europe first this February, with the US to follow in March.

In this article: archos, ces2014, connecteddevices, connectedhome, hands-on, household, internetofthings, smarthome
All products recommended by Engadget are selected by our editorial team, independent of our parent company. Some of our stories include affiliate links. If you buy something through one of these links, we may earn an affiliate commission.