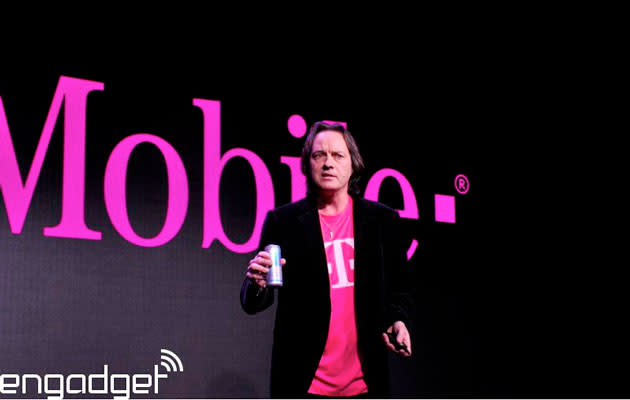 T-Mobile has just announced that it plans to end one of the last remaining barriers to get people to switch over to its network: those pesky early termination fees. At its fourth Uncarrier event at CES 2014, the carrier announced that starting tomorrow, customers from the three other competing national carriers -- Sprint, Verizon and AT&T -- can trade in eligible handsets to any T-Mobile location, switch over and get an instant credit of up to $300. You would then purchase a T-Mobile handset and then send your final bill from your previous carrier to T-Mobile -- either via mail or upload to T-Mobile's website -- as proof of your early termination fees. The magenta carrier will then send you an additional payment of up to $350 per line (for up to five lines) to pay those off, and both individual and family plans apply. Only those who are trading in phones, transferring their number and getting new handsets from T-Mobile are eligible to partake in the deal. 7
In this article: ces, ces2014, mobilepostcross, t-mobile, tmobile, uncarrier
All products recommended by Engadget are selected by our editorial team, independent of our parent company. Some of our stories include affiliate links. If you buy something through one of these links, we may earn an affiliate commission.