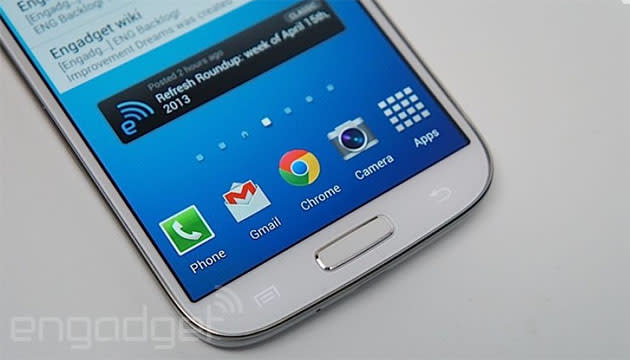 Samsung has admitted that the public didn't see much difference between the Galaxy S III and S4 smartphones and said the S5 would likely pack a substantially different design. Exec Lee Young Hee told Bloomberg that the new flagship will go "back to basics," adding that "mostly, it's about the display and the feel of the cover." It'll also arrive with a brand-new version of the Galaxy Gear smartwatch, which itself will have "more advanced functions" and an improvement to what she called "the bulky design." Other revelations include a possible eye-scanner in the handset for greater security, though that's still being studied.

Farther down the road, Samsung said that it's looking at significant changes for the Galaxy Note 3's successor in order to target it at professionals who are "willing to pay more for handsets." As such, it may pack a three-sided display, like the so-called Youm prototype we saw last year at CES 2013, allowing users to read messages from oblique angles. Finally, Lee revealed that the Galaxy S 5 would arrive in March or April after Mobile World Congress in Barcelona. Considering we saw the Galaxy S III and S4 around the same period in previous years, however, that's not a big shocker.

In this article: bloomberg, EyeScanning, GalaxyGear, GalaxyS5, Interview, samsung
All products recommended by Engadget are selected by our editorial team, independent of our parent company. Some of our stories include affiliate links. If you buy something through one of these links, we may earn an affiliate commission.