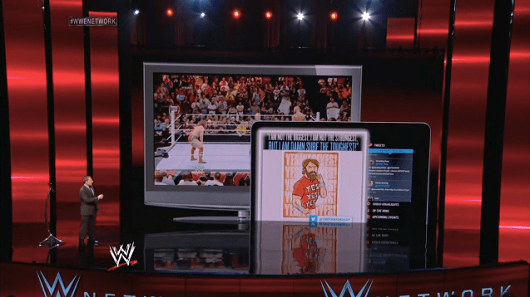 Keen on reliving the Tommy Dreamer and Raven feud from ECW in its entirety? Fancy looking back at the war for Monday night between Raw and Nitro? Enter: WWE Network, the WWE's subscription-based network for the US full of original programming and archived WWE, WCW and ECW pay-per-view events.

WWE Network will cost $10 a month when it launches next month, with apps planned for both PlayStation and Xbox consoles. Streaming will be in 720p and a subscription will guarantee you access to WWE's monthly pay-per-view events. Wrestlemania Rewind, part of the planned original programming to supplement the older matches, will offer wrestler commentary over famous matches of yesteryear, while Countdown will be an hour-long program ranking top finishers, submissions and other sweet wrasslin' moves.

WWE Network will be available in the US on PC, PlayStation consoles, iOS, Android, Kindle, Xbox 360 and Roku at launch, after Monday Night Raw on February 24th. Xbox One and smart TV support will be added later this summer, and WWE says it has plans to extend WWE Network to other regions by the end of the year.
In this article: android, ios, ipad, iphone, mac, microsoft, mobile, pc, playstation, ps3, ps4, wwe, wwe-network, xbox, xbox-one
All products recommended by Engadget are selected by our editorial team, independent of our parent company. Some of our stories include affiliate links. If you buy something through one of these links, we may earn an affiliate commission.