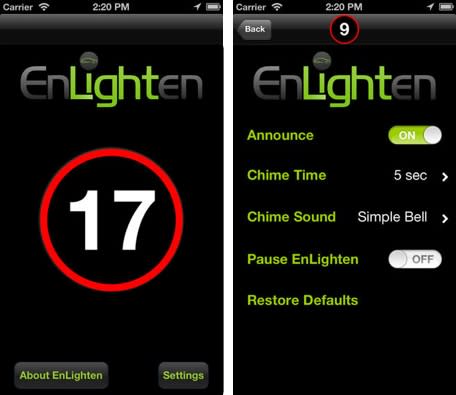 EnLighten is a clever little app from Green Drive that helps you monitor traffic lights. The app senses when you stop and will calculate the amount of time you will be sitting at a red light. It's meant to help you relax while you wait and get alert when it is time to move.

The app uses its own algorithm to calculate the time when a traffic light will change from red to green. A countdown timer ticks off the seconds, while a chime alerts you right before the light is about to change. It's a basic tool, but very effective at "waking you up" before you have to drive through an intersection.

For the app to work properly, your city and its traffic light system has to be included in the app's database. As of right now, the company has nine towns and cities including Portland, Oregon; Eugene, Oregon; Pasadena, California; Arcadia, California; San Jose, California; Salt Lake City, Utah; Provo, Utah; Garland, Texas and Las Vegas. Additional cities will be added throughout 2014.

Even if you can't use the app because you don't live in one of pilot cities, it's worth knowing about the technology. I could easily see it or a similar app being embedded in an in-car navigation system in the future.

You can download EnLighten for free from the iOS App Store. It works on the iPhone and requires iOS 6.1 or later.

In this article: app, Enlighten, iPhone, traffic light
All products recommended by Engadget are selected by our editorial team, independent of our parent company. Some of our stories include affiliate links. If you buy something through one of these links, we may earn an affiliate commission.
Share
Tweet
Share