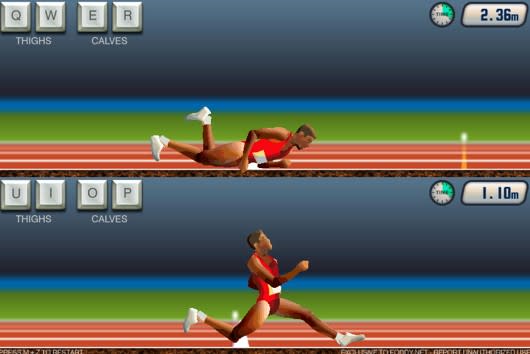 IndieCade East will be held at the Museum of the Moving Image in Astoria, New York, for the second year running, this time from February 14 - 16. IndieCade East includes seminars and panels from high-profile indie developers, academics and journalists, plus seminars, an eSports competition and Night Games East, an outdoors exhibition of physically interactive games.

Keynote speakers this year include QWOP creator Bennett Foddy and Tale of Tales co-founder Aureia Harvey. Both QWOP and Tale of Tales' The Path are part of the Indie Essentials exhibition in the museum through March, which showcases 26 indie games including Gone Home, Braid, Kentucky Route Zero, N., Quadrilateral Cowboy and Spelunky.

The festival's Show & Tell space allows developers with full access passes to show off their games in two-hour slots on February 15 or 16. Sign ups are available here. Among all of the indie devs, IndieCade East will feature booths from Sony with the PlayStation 4 and Vita, plus Oculus Rift and Facebook.

Festival passes are on sale now, $100 through January 31. From February 1, passes will be $125. Individual days run $45 for Friday, $55 for Saturday including access to Night Games East, and $45 for Sunday.
Show full PR text
INDIECADE EAST, INDIECADE'S EAST-COAST EDITION OF THE
PREMIER INDEPENDENT VIDEO GAME FESTIVAL, RETURNS
TO MUSEUM OF THE MOVING IMAGE FOR YEAR TWO

This year's keynote speakers include New York-based gamemaker and NYU professor
Bennett Foddy, developer of the Flash-based physics simulation game QWOP, and
Auriea Harvey, co-founder of the Belgian company Tale of Tales, creator of the gothic
story game The Path. Both games are featured in the exhibition Indie Essentials: 25
Must-Play Video Games along with 24 other groundbreaking independent game titles
from the last decade, organized by the Museum and IndieCade and on view at the
Museum through March 2.

In addition to more than 30 diverse talks and panels, IndieCade East will offer a range
of valuable workshops from introductions to digital gamemaking tools to hands-on
game design tutorials. Other highlights include a workshop led by the New York-based
Code Liberation Foundation on encouraging female participation in game
development; an inside look at the creation of a new indie gaming conference in Japan,
BitSummit, from the event's organizer and game developer James Mielke; and a talk
by game designers Joshua DeBonis and Nikita Mikros on the development of the
ten-player arcade game Killer Queen Arcade, which is also featured in the exhibition useum of the Moving Image Page 2
Indie Essentials.

In the Show & Tell showcase (register here), IndieCade East will give emerging game
developers the opportunity to present their latest creations to an audience of
gamemakers and avid gamers.

Opportunities for gameplay abound throughout IndieCade East: The Indie Essentials
exhibition invites attendees to play the award-winning games from IndieCade Festival
2013, alongside other innovative independent games from the past decade; an eSports
showcase and tournament will be presented throughout the weekend; and Night
Games East, on Saturday, February 15, activates the Museum's galleries and theaters
for an evening of physical and large-scale games (access to Night Games East is
included with full festival pass or Saturday day pass). In addition, IndieCade East
exhibitors PlayStation®4, PlayStation®Vita, Oculus Rift, and Facebook will showcase
their latest titles.

"We are excited to build on the success of last year's IndieCade East, and to welcome
gamemakers and players to the Museum to celebrate the art, technology, and
business of independent game design and production," said Carl Goodman, Executive
Director of Museum of the Moving Image.

"Last year's inaugural IndieCade East and our collaboration with the Museum on the
Indie Essentials exhibition were such a success that we are thrilled to return for year
two," said Stephanie Barish, Founder and CEO of IndieCade. "With game creators from
the region and beyond hosting screenings, giving talks, and presenting their games for
gameplay, IndieCade East will provide a window to powerful creative visions from
around the world. All weekend we'll spotlight work that provokes thought and
conversation, and that pushes the boundaries of interactive entertainment and how we
see games."

Jason Eppink, the Museum's Associate Curator for Digital Media, said, "IndieCade East
offers New Yorkers a great opportunity to dive into the world of independent games-
there's something for everyone from the casual gamer to the dedicated scholar and
emerging gamemakers."

More information to be announced soon. Check movingimage.us or IndieCade.com for
updates.

For families: Admission for children (ages 3–12) will be $10 per day. Many of the
games on view will appeal to visitors of all ages. Throughout the weekend, the Museum
will also present "The Game-Making Game," a workshop for children ages 8 and older
(materials fee applies).