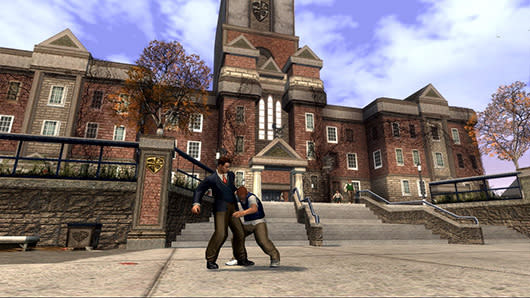 Rockstar Games may not have introduced zombies to its childhood delinquency simulator Bully, but thanks to industrious modders you can see what might happen if shambling corpses were to invade Bullworth Academy.

That footage you see above comes from Bully: Zombie Edition, an in-production modification for the PC version of Bully: Scholarship Edition that strips out most of its gameplay elements in favor of a new, as yet incomplete storyline. We'd tell you more about this new zombie-focused plot, but the mod's creators have yet to publicly reveal any details of what it might include. Likewise, the clip above is taken from an early stage of the modification, and should be viewed only as a proof of concept for the game's environments as well as its formerly deceased inhabitants.

As of now there's no scheduled release date for Bully: Zombie Edition, but if you'd like to keep tabs on the mod you can visit its ModDB page. Everything you need to know can be found there and presumably that will be where the modification first debuts, once it's complete.
In this article: Bully, bully-scholarship-edition, mod, pc, RockStar, Rockstar-Games, zombies
All products recommended by Engadget are selected by our editorial team, independent of our parent company. Some of our stories include affiliate links. If you buy something through one of these links, we may earn an affiliate commission.