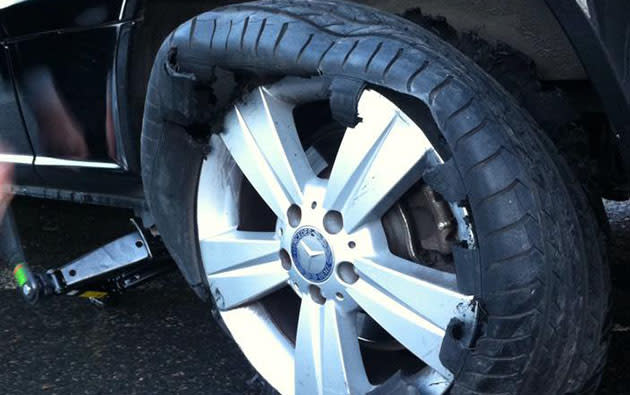 Though a new French law gives cabs there a 15-minute head start against private companies like Uber and LeCab, taxi drivers are far from done protesting. Things may have just taken a violent turn, as an Uber car with a pair of Eventbrite execs aboard was just attacked on its way from a Paris airport. The culprits slashed two tires, dumped glue on the car and broke windows, which cut the hands of CTO Kat Borlongan, according to her tweet. She added that the Uber driver managed to maneuver out of harm's way before the attackers could enter the vehicle. There's no proof that taxi drivers were behind the attack, but Uber believes they're responsible, and there have been vehement protests in France by traditional cabbies who have paid enormous sums for their official permits and now feel that their livelihoods are being threatened by new car services. Meanwhile, there's a good chance the new "15-minute" law will be struck down anyway, according to Rude Baguette. That's because the legislation was passed by presidential decree, meaning it's held to a higher anti-competition standard -- which it seems unlikely to meet.

Update: Uber has confirmed and "strongly condemned" the attack in a statement to Venture Beat (after the break).

Unfortunately, I can confirm this morning's incident in Paris occurred and we strongly condemn this severe violence two of our riders and our partner were confronted with.

First and foremost, we are relieved that all involved are safe and ok. Also, we would like to praise our partner who has shown great courage and professionalism, focusing on getting his customers out of a very challenging situation as swiftly as possible.

That the taxis chose to use violence today is unacceptable, that they chose to strike is their business. However, Parisians also have a choice when it comes to moving around in their cities, and today's incident will certainly not tempt Parisians into choosing a taxi for their next ride. Safety, reliability and choice, not violence, are what continues to draw customers towards private hire vehicles.

In this article: CarService, France, protests, taxi, Uber, vandalism
All products recommended by Engadget are selected by our editorial team, independent of our parent company. Some of our stories include affiliate links. If you buy something through one of these links, we may earn an affiliate commission.