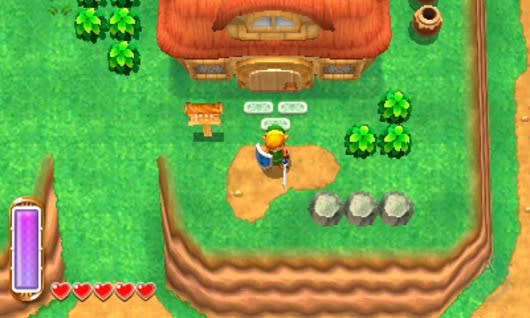 If you haven't yet had the chance to delve into Link's latest dimension-hopping journey, The Legend of Zelda: A Link Between Worlds for the Nintendo 3DS is $29.99 at Fry's this week, making it a good time to catch up on one of last year's greatest games.

A Link Between Worlds builds on the structure that defined the Super NES classic The Legend of Zelda: A Link to the Past, taking place in the same overworld and featuring many elements familiar to series fans. The game emerges as a worthy adventure in its own right, however, thanks to its ingenious item-rental mechanic and open-ended quest that gives players the freedom to explore Hyrule and its dark counterpart Lorule at their own pace.

A Link Between Worlds is available for $29.99 at Fry's through January 16.
In this article: 3ds, discount, frys, nintendo, sale, the-legend-of-zelda-a-link-between-worlds
All products recommended by Engadget are selected by our editorial team, independent of our parent company. Some of our stories include affiliate links. If you buy something through one of these links, we may earn an affiliate commission.