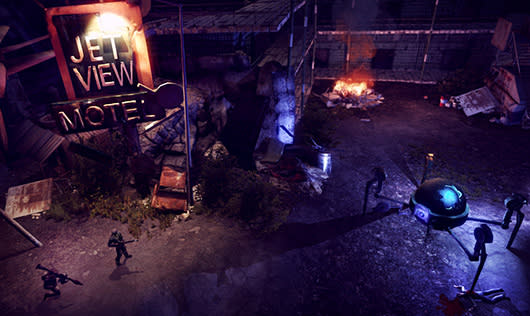 Following a month of beta testing, developer inXile Entertainment has outlined its plans for post-apocalyptic roleplaying game Wasteland 2, and it looks like the studio has its work cut out for it.

Alongside the typical bug fixes, inXile hopes to focus primarily on improving the game's combat mechanics. "Destructible cover was part of this last update as a first pass with more fine-tuning to come," writes creator Brian Fargo on the game's Kickstarter page. "[W]e will likely add a crouching stance with a variety of tactical applications; we're going over a lot of the encounter design to more carefully detail tactics-changing factors like ladders or destructible cover; and we're in the first testing stages to explore adding a special attack system that'll allow you to invest AP to make specific kinds of attacks based on your weapon types and the skill levels you've achieved in those weapons ... things like spread shots or steady shots."

Fargo adds that combat in Wasteland 2 is currently in the very early stages of development and that the final version of the game will feature vastly improved enemy AI, as well as additional special attacks and skills that can damage groups of enemies.

Beyond combat improvements, inXile's list of goals for Wasteland 2 is lengthy. It includes "several balance passes on everything in the world," creating a new minimap, changing the in-game font, tweaking the UI seen when bartering with other characters, and adding additional, "satisfying" death animations, among a host of other changes.
In this article: beta, brian-fargo, fallout, kickstarter, pc, wasteland, wasteland-2
All products recommended by Engadget are selected by our editorial team, independent of our parent company. Some of our stories include affiliate links. If you buy something through one of these links, we may earn an affiliate commission.