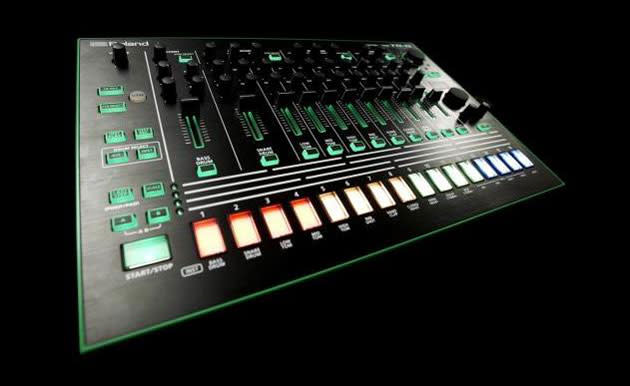 What you see here is a leaked image that claims to be the upcoming successor to the classic TR-808 drum machine from Roland. If you're in need of a refresher, the unit debuted in 1980 and powered a truckload of iconic sounds over the past 30 years, including Marvin Gaye's "Sexual Healing" and Afrika Bambaataa's "Planet Rock." Heck, it's still getting plenty of use by musicians and producers today. In a video teaser discussing the heritage of the original device, Roland's Atsushi Hoshiai notes that the outfit feels "it's time to take the next step." Near the end of the video, you'll catch a glimpse of what appears to be the new drum machine -- labeled the AIRA -- that matches up well with the snapshot. A green-rimmed black unit is flashed briefly and what's shown of the button layout seems to match up with that image obtained by Attack Magazine.

Details are scarce at this point, but the big question is whether the AIRA will be a brand-new digital version or a reissue that's analog like the original. It's also worth noting that Korg has gone analog with recent product launches, like the Volca synth series and MS-20 mini, so hopefully Roland will follow suit. We're just days away from NAMM 2014, so the new unit may get a proper unveiling in Anaheim... if we're lucky. The aforementioned video awaits just past the break, so you can have a look for yourself.

In this article: analog, aria, drummachine, roland, tr-808, video
All products recommended by Engadget are selected by our editorial team, independent of our parent company. Some of our stories include affiliate links. If you buy something through one of these links, we may earn an affiliate commission.