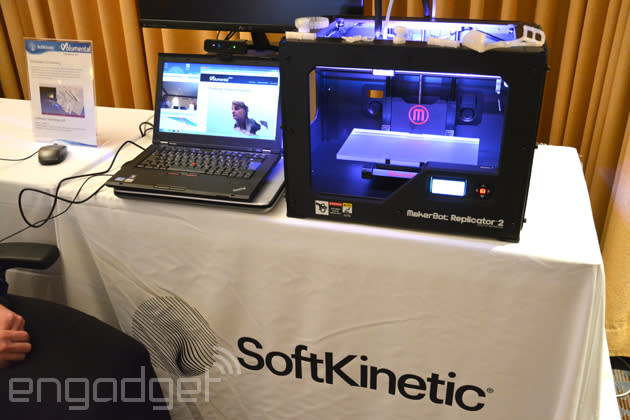 SoftKinetic, the 3D gesture middleware provider for Intel and Ubisoft's Just Dance 2014 for the PS4, is once again catching our attention by announcing its strategic partnership with MakerBot at CES. These two companies will work on optimizing the former's time-of-flight depth camera technology for 3D scanning, which will hopefully help popularize MakerBot's 3D printers. While we didn't get to see objects being printed live at the show, SoftKinetic's CMO Eric Krzeslo surprised us by how quickly he could scan a person's face using his depth camera. The data was then sent to Volumental's impressive cloud service, which returned a printer-ready render in a matter of minutes. See for yourself in our video after the break.

SoftKinetic also announced that NVIDIA's Tegra Note 7 platform comes with the former's gesture recognition middleware, as well as support for its DepthSense 3D Time-of-Flight USB camera. This means OEMs or developers will be able to quickly implement short-range ("as close as 6 inches away") gesture control on NVIDIA's tablet reference design. At this rate, it shouldn't be long before we can control our tablets from afar -- it's just too much effort to reach over one's bowl of noodles to poke the screen. 4
In this article: 3dcamera, 3dprinting, 3dscanning, ces2014, depthcamera, EricKrzeslo, featured, features, hands-on, makerbot, nvidia, softkinetic, tegra4, tegranote7, video, volumental
All products recommended by Engadget are selected by our editorial team, independent of our parent company. Some of our stories include affiliate links. If you buy something through one of these links, we may earn an affiliate commission.