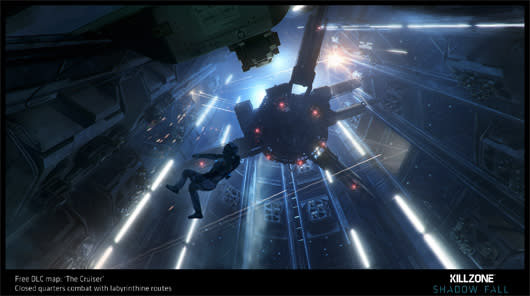 The first batch of promised free multiplayer maps, based on locations seen in the single-player campaign for Killzone: Shadow Fall, is on the way. The Cruiser, a map designed for more intimate close-quarters combat, is set within a decommissioned ISA cruiser ship (see: big boat) and is largely comprised of cramped corridors. The other map, The Hangar, places players within a wide-open Helghan mining spire, which serves as particularly good sniping grounds.

These maps unfortunately still haven't been dated for release. On top of the free maps, developer Guerrilla Games is also working on Killzone: Shadow Fall's first expansion pack, about which the studio promises to share more info in the near future. This first expansion pack will be available as part of the game's Season Pass content.

Killzone: Shadow Fall, a PS4 launch title, resides on the border between good and great, our review said. The game's multiplayer side is punctuated by a make-your-own game type editor, with which both of these proposed maps are fully compatible.

[Thanks, Denis.]
In this article: Guerrilla-Games, killzone-shadow-fall, playstation, ps4, the-cruiser, the-hangar
All products recommended by Engadget are selected by our editorial team, independent of our parent company. Some of our stories include affiliate links. If you buy something through one of these links, we may earn an affiliate commission.