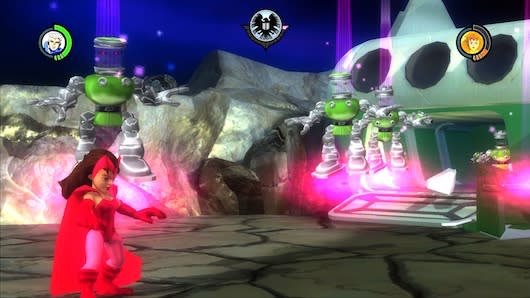 Marvel Super Hero Squad: The Infinity Gauntlet's band of superheroes can no longer assemble on the Xbox Live Marketplace and PlayStation Network. The game's PSN listing now notes that the game is available in a "disc only" format, while the XBLA listing doesn't offer a price or way to purchase the game. Revealed in 2010 as a sequel to Marvel Super Hero Squad, Infinity Gauntlet's cast brawled their way through hordes of Lethal Legion followers in a plot related to the second season of a Cartoon Network series.

Infinity Gauntlet's digital unavailability follows the disappearance of several Marvel-branded games earlier this month, as well as Capcom's pulling of Marvel vs. Capcom 2 and Ultimate Marvel vs. Capcom 3 in December. It's possible that Disney's acquisition of Marvel in 2009 is resulting in lapsed licensing agreements, but no explanation has been given as to why these games have been removed from console storefronts. In contrast, the more recent LEGO Marvel Super Heroes is still available in both stores.

Of course, you can still hunt down retail copies of any Marvel games you were still considering purchasing. Considering warnings for some of these delistings were scattered across social media accounts, retail copies might be the easiest option to keep track of anyway.
In this article: marvel, marvel-super-hero-squad, microsoft, playstation, playstation-network, ps3, psn, sen, sony-entertainment-network, xbla, xbox, xbox-live-arcade
All products recommended by Engadget are selected by our editorial team, independent of our parent company. Some of our stories include affiliate links. If you buy something through one of these links, we may earn an affiliate commission.