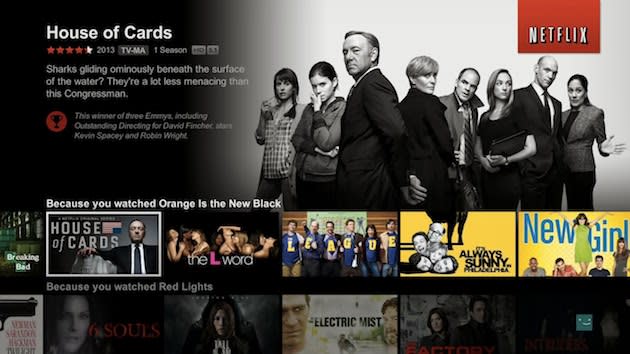 Don't color us surprised by The NPD Group's latest report, one that highlights the decline in subscriptions for paid TV networks over the last couple of years in the US. According to the research, there was a six percent overall drop in the amount of subscribers to channels like HBO and Showtime in the past two years; conversely, video streaming services had a four percent growth in that same period of time.

As of August 2013, NPD says 32 percent of American households were subscribed to a premium TV network, while 27 percent held an on-demand streaming subscription. Not surprisingly, the findings note that Netflix is leading the way among US folks, although Hulu Plus and Amazon Prime aren't far behind and have experienced "the biggest growth benefits in the category." A sign o' the times indeed -- and with companies like Netflix producing great original content, these numbers will likely keep getting better for members of the streaming pack.

Update: As reported by The Wrap, NPD has pulled the original report from its website, and is reviewing its data, after HBO, Showtime and Starz all claimed their numbers show recent growth instead of decline.

In this article: cord cutting, HBO, hdpostcross, Netflix, NPD, NPD Group, Showtime, streaming, video on demand, video streaming, vod
All products recommended by Engadget are selected by our editorial team, independent of our parent company. Some of our stories include affiliate links. If you buy something through one of these links, we may earn an affiliate commission.