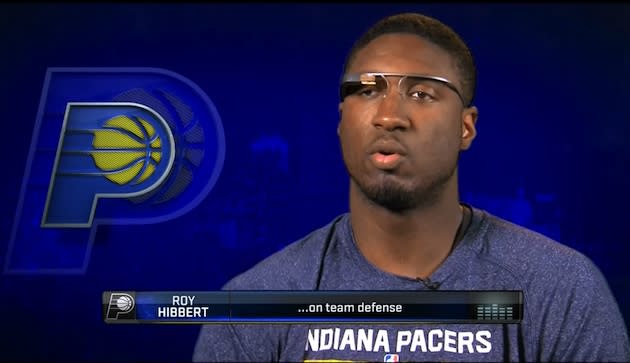 Despite the many uses for Google Glass, this new class of wearable devices is inevitably meeting some growing pains (pictured above is 7'3" Indiana Pacers center Roy Hibbert, a Glass wearer who has experienced some growing pains) as the world gets used to them. One wearer successfully fought a traffic ticket recently and now another early adopter suffered the "embarrassing" experience of being removed from a movie theater for bringing the accessory. In a story originally posted on The Gadgeteer, the unnamed individual stopped by the AMC Easton 30 in Columbus to watch Jack Ryan: Shadow Recruit, wearing Google Glass attached to his prescription lenses, something he says he'd done before without any trouble.

Where the story takes a twist however, is when officers moved in an hour into the movie, yanked the Glass from his face, and brought the man and his wife to separate interrogation rooms for over three hours. Apparently unfamiliar with the device and already on alert for piracy at that theater -- most pirates using this technique bring camouflaged hand-held cameras -- it took quite some time before they eventually (with the owner's permission/at the owner's insistence) plugged Glass into a computer, reviewed the stored images and determined he had not been recording the movie. U.S. Immigration and Customs Enforcement Khaalid Wells confirmed the January 18th incident calling it a "brief interview."

AMC released a statement to Engadget (available in full after the break) which says theater owners contact the MPAA when suspected recording takes place, in this case prompting an investigation and resulting in contact with Homeland Security. AMC feels like wearing devices with recording capabilities "is not appropriate at the movie theatre," a position that will be hard to hold as movie viewers arrive with their Glass, Gear and other camera-equipped wearable tech, and sticks out here because they were attached to prescription lenses. The initial rollout of camera-equipped phones led to similar awkward interactions, although being arrested certainly takes things to another level. The wearer reports his Glass was returned, undamaged, but at last update he'd received only a few free movie passes for his troubles.

Movie theft is something we take very seriously, and our theater managers contact the Motion Picture Association of America anytime it's suspected that someone may be illegally recording content on screen. While we're huge fans of technology and innovation, wearing a device that has the capability to record video is not appropriate at the movie theatre. At AMC Easton 30 last weekend, a guest was questioned for possible movie theft after he was identified wearing a recording device during a film. The presence of this recording device prompted an investigation by the MPAA, which was on site. The MPAA then contacted Homeland Security, which oversees movie theft. The investigation determined the guest was not recording content.

In this article: amc, arrest, columbus, Easton, glass, google, googleglass, hdpostcross, HomelandSecurity, ice, mobilepostcross, movietheater, mpaa, piracy
All products recommended by Engadget are selected by our editorial team, independent of our parent company. Some of our stories include affiliate links. If you buy something through one of these links, we may earn an affiliate commission.