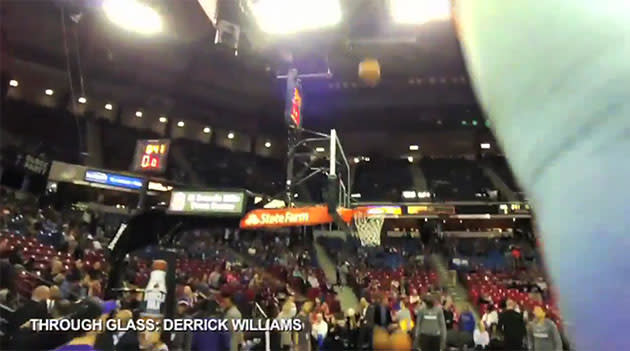 Watching hoops from the stands or on TV is great, but have you ever wanted to see an NBA game from the perspective of a coach, cheerleader or broadcaster? That's going to happen on January 24th during a Sacramento Kings broadcast vs. the Indiana Pacers, as select players and staff will be decked out in Google Glass -- along with the team's mascot, announcers, dancers and others. All that will be coordinated by a company called CrowdOptic, which will analyze in real time where all the devices are aimed and distill everything to a manageable feed for broadcast. At the same time, the Kings have announced that it'll be the first pro sports franchise to accept Bitcoins, letting fans purchase merchandise and tickets by March 1st using the virtual currency. There's a video after the break to give you a sneak peak at the players-eye-view -- we'll have to see if they're smiling as much after the game.

In this article: BitCoin, broadcast, google, GoogleGlass, hdpostcross, SacramentoKings
All products recommended by Engadget are selected by our editorial team, independent of our parent company. Some of our stories include affiliate links. If you buy something through one of these links, we may earn an affiliate commission.