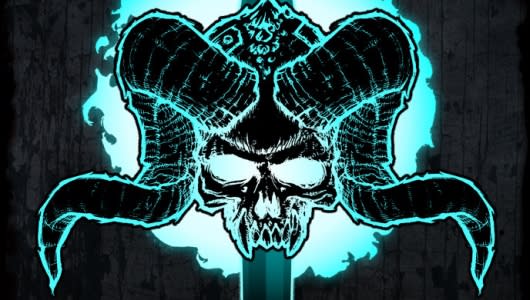 The second class revealed for Pantheon: Rise of the Fallen isn't the hero that the world of Terminus needs, but it's the one the world deserves. The Dark Knight is exactly what it sounds like on the tin: Aside from striking fear into the cowardly and superstitious lot of Terminus' monsters, it's a fusion of melee abilities and destructive spellcasting that draws upon unholy might. It's a class with plenty of toys to mix with extensive martial training, and it serves nicely as a peek at the conceptual space of Pantheon's classes.

Dark Knights have access to several choices of both weapon and armor, generally focusing on heavy plate armor along with two-handed swords, shield, and axes. They also possess the ability to drain life and strength from their foes, apply diseases, summon necromantic minions, and possibly hang upside-down from gargoyles. There's a bit more lore to be found in the official reveal; keep your ears open for more classes so that you'll be properly prepared.
In this article: brad-mcquaid, class, class-concept, class-mechanics, class-preview, crowdfunding, dark-knight, kickstarter, kickstarter-update, news, news-item, pantheon, pantheon-rise-of-the-fallen, pantheon-rotf, protf, rise-of-the-fallen, rotf
All products recommended by Engadget are selected by our editorial team, independent of our parent company. Some of our stories include affiliate links. If you buy something through one of these links, we may earn an affiliate commission.