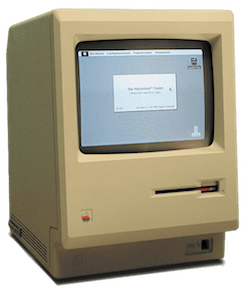 In January of 1984, Steve Jobs introduced the Apple Macintosh to the world. Below you can watch the first public demo of the computer, live in front of 3,000 people. What's most striking about the demo is how common every revolutionary idea that caused the audience to ooh and ahh has become.

From powerful graphic design processing, 3D gaming graphics, document templates, myriad fonts and simplified coding interfaces, it's wonderful to see the excitement and lack of cynicism from the crowd. They simply watch in polite cheering wonder.

Until the text-to-speech feature is debuted. Suddenly the crowd explodes with wild cheering, like Hal 9000 was making its first appearance on the Ed Sullivan Show. Granted, it's a charming exchange, with the computer's "first words" being "Hello, I'm Macintosh. It sure is great to get out of that bag. Unaccustomed as I am to public speaking, I'd like to share with you a maxim I thought of the first time I met an IBM mainframe. NEVER TRUST A COMPUTER YOU CAN'T LIFT."

After giving its adorable standup comedy act, the computer introduces its "father" -- Jobs. The look on Jobs' young face as the crowd roars tells you everything. This is a game-changing moment for Apple as a company. If only that crowd could imagine how much computers were about to evolve because of the path followed with this wonderful little machine.

In this article: apple, macintosh, steve jobs, video
All products recommended by Engadget are selected by our editorial team, independent of our parent company. Some of our stories include affiliate links. If you buy something through one of these links, we may earn an affiliate commission.