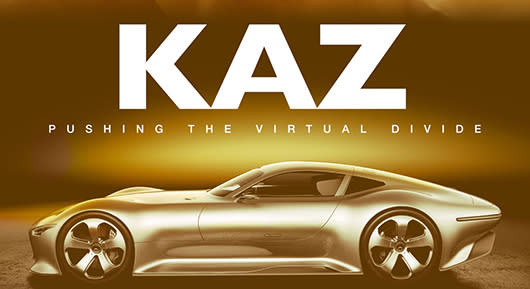 Directed by Tamir Moscovici (Urban Outlaw, Painting Coconuts), KAZ explores the creation of the Gran Turismo series in the context of Yamauchi's lifelong fascination with cars and racing. The film focuses on Yamauchi's "relentless willingness to challenge himself, to hold none of his past achievements sacred, and push beyond the virtual divide in his pursuit of perfection."

The documentary will also begin airing on the Sony Movie Channel starting next month, and will be available for download from the Sony Entertainment Network. KAZ launched this week as a Hulu exclusive.
Show full PR text
"KAZ: PUSHING THE VIRTUAL DIVIDE" FILM DOCUMENTS THE 15 YEAR PURSUIT OF PERFECTION IN GRAN TURISMO®

SAN MATEO, Calif., Jan. 22, 2014-This film is about drive. It's about the passion and creative drive of Kazunori Yamauchi, the architect behind PlayStation's® Gran Turismo birth and breath-taking 15-year evolution. Sony Computer Entertainment America, LLC and Industry Films today premiered on Hulu, "KAZ: Pushing the Virtual Divide,"a documentary by director Tamir Moscovici ("Urban Outlaw,""Painting Coconuts"). "KAZ" traces Kazunori's relentless willingness to challenge himself, to hold none of his past achievements sacred, and push beyond the virtual divide in his pursuit of perfection.

Kazunori developed a fascination with cars early on in life, at the age of three, joining his father as he drove to work each day. The idea for Gran Turismo was conceived when we was just 15. His first love was the Nissan GT-R, and it was also his first crash at the age of 24. This same fascination that underscored decades of driving passion was the beginning of a 15-year expression of love that would spawn the greatest video game racing franchise, TV racing series "GT Academy," an upcoming feature film, and groundbreaking automotive industry programs such as Vision GT. Through PlayStation, Kazunori's journey and struggles have forever changed the gaming and automotive landscape to redefine the relationship between art, entertainment and culture.

"I feel truly lucky to be able to create a driving game that can capture the emotion and true feeling of cars from around the world," said Kazunori Yamauchi, president of Polyphony Digital Inc. and creator of Gran Turismo. "I am honored to share a part of my life's vision with the fans and excited to see how everyone who has been part of the Gran Turismo movement has changed the course of the gaming and automotive industries in ways we never dreamed possible."

Director Tamir Moscovici commented on the unique intersection between car culture, filmmaking, and the Gran Turismo series: "What really inspired me while making this documentary about Kazunoriand Gran Turismo was the element of loyalty and family that was evident from the start. This same feeling of being part of something exciting is extended to the fans and it's why there is such a devoted following for something that many would perceive as simply a video game. Shooting footage of rare cars and following the team across the world as they created the game was exciting, but our big picture was to shed the exterior, to be able to capture how this movement has changed the lives of millions."

Gran Turismo 6®, which launched on Dec. 6, 2013is the latest installment of the best-selling franchise available exclusively for the PlayStation®3 system, delivering the most complete and expansive racing game on any console.
In this article: documentary, film, gran-turismo, kaz-pushing-the-virtual-divide, kazunori-yamauchi, playstation, ps3, sony
All products recommended by Engadget are selected by our editorial team, independent of our parent company. Some of our stories include affiliate links. If you buy something through one of these links, we may earn an affiliate commission.