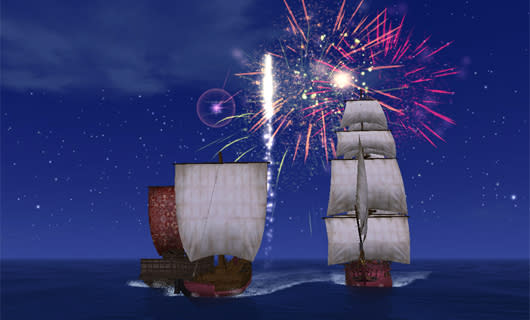 Uncharted Waters Online relaunched under a new publisher a scant two months ago, and now the historically based sea-faring game has a new expansion. OGPlanet announced the release of 2nd Age, which adds plenty of new content for virtual sailors to enjoy.

In UWO: 2nd Age, players can manipulate the flow of time and trigger different historical events with the new World Clock, take on new missions and adventures, embark on treasure hunts for rare relics, and combine forces to take on the new boss Ganador, Ruler of the Sea. New ships, modeled off of historical vessels, were also added: England's Privateer 'Sir Francis Drake'; the French Royal family's 'Crown'; and the Lubeck Merchant's Guardian ship 'Eagle'. Additionally, players can influence who wins the election for the next Roman Emperor. Before setting sail, get in the mood of 2nd Age with the official cinematic trailer below.

In this article: 2nd-Age, expansion, f2p, free-to-play, freemium, microtransaction, microtransactions, new-content, new-ships, OGPlanet, premium, ships, trailer, trailers, uncharted-waters-online, UWO, UWO-2nd-Age, video, videos
All products recommended by Engadget are selected by our editorial team, independent of our parent company. Some of our stories include affiliate links. If you buy something through one of these links, we may earn an affiliate commission.