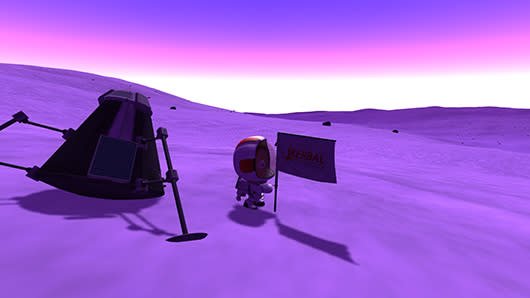 Hoping to make rocket science a bit more palatable to the average person, the developers behind Kerbal Space Program have joined forces with TeacherGaming to launch a modified version of the game called KerbalEdu.

Kerbal Space Program, for those unaware, is a construction game that gives players a wide range of components, then asks them to build and launch a spacecraft. The game's physics are meticulously detailed, making this easier said than done. In the course of designing a functional spaceship, players will repeatedly crash, explode and lose ships in increasingly spectacular fashion, but with each failure they learn a bit more about how to push their rocket into space. This is what KerbalEdu hopes to capitalize on.

"KSP is about making rocket science fun, which is why we didn't need any complex algorithms to realize an educational version is a great extension," said Adrian Goya, co-owner of Kerbal Space Program developer Squad.

The first release of KerbalEdu has yet to appear, but TeacherGaming has revealed plans to alter the game's UI to make data collection more simple and akin to real world scientific methods. Further, the educational developer also plans to build a series of lessons into the game that focus on specific topics. These will be complemented by more traditional educational materials which expand upon the lessons taught by the game.

Educators interested in this modification can follow its progress and receive details on how to employ it in the classroom on the official KerbalEdu website.
Show full PR text
KerbalEdu Extends Kerbal Space Program Into Education
Custom mod of KSP offers scholastic approach to popular indie space agency sim game

MEXICO CITY and TAMPERE, Finland – January 23, 2014 – Teachers and students can now work together to learn rocket science and the joys of space travel with the official launch of KerbalEdu, an educational modification of the popular, award-winning space agency game Kerbal Space Program.

Squad, the developers of KSP, have partnered with TeacherGaming to launch this project. Still in early development, interested educators and students can go to www.kerbaledu.com for more information on the game, which is available on compatible Windows, Mac OS and Linux computers. Squad will continue to develop KSP, which is currently available through early access on its website as well as Steam and other popular online gaming retailers. TeacherGaming, like its prior popular release MinecraftEdu, will modify KSP to enhance its value to professors and teachers in a classroom setting.

"KSP is about making rocket science fun, which is why we didn't need any complex algorithms to realize an educational version is a great extension," said Squad co-owner Adrian Goya. "TeacherGaming's experience makes them an ideal partner and we believe KerbalEdu is going to be a great tool for science teachers throughout the world to teach our next generation of rocket scientists and astronauts."

TeacherGaming hasn't released the first KerbalEdu mod but is planning several features specifically for teachers, including:
Metric system and other systems for easier data comparison and integration with other school topics
UI alterations to include analyzer and data collector tools for easier data gathering, data summarization and problem solving with ship designs
Premade lessons that introduce or need a specific scientific method or formula to be solved, such as a rocket with too small of an engine needing more thrust
Valuable materials outside of the actual game, but with heavy connections to it, that help educators drive home important lessons
While Squad will remain focused on making sure every new feature in Kerbal Space Program is fun, TeacherGaming has the same goal – with an educational emphasis.

"KerbalEdu is going to help players do more than just dream of the stars in their classroom. It's going to give them the tools to learn how to reach them," TeacherGaming CEO Santeri Koivisto said. "Squad is a great partner and a believer in our mission to use games to help educate the next generation of students."

Schools and other educational institutions interested in KerbalEdu can purchase the educational version of Kerbal Space Program for a discounted price and schools who do decide to use the software will also have the opportunity to offer their students a discounted price on Kerbal Space Program.
In this article: education, educational, kerbal-space-program, kerbaledu, mac, mod, pc, science, teachergaming
All products recommended by Engadget are selected by our editorial team, independent of our parent company. Some of our stories include affiliate links. If you buy something through one of these links, we may earn an affiliate commission.