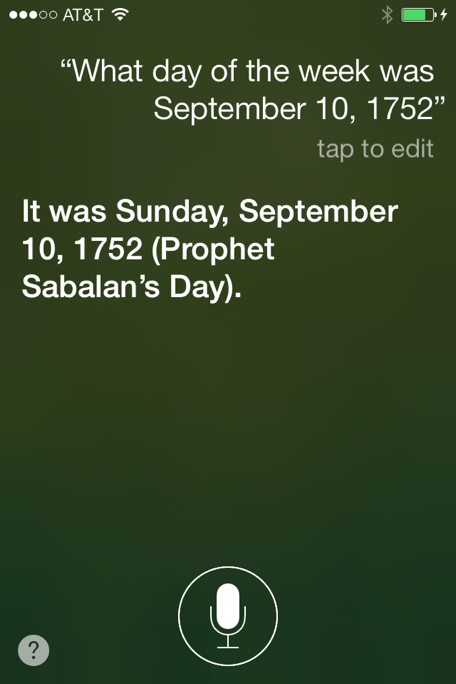 Here's the thing about September 10, 1752. It didn't exist. In fact, as far as the UK and its colonies were concerned (this included what later became the US), there was no September 3 through 13 at all. That's due to the change from the older Julian calendar to the reformed Gregorian calendar. (The whole thing about rioters demanding back their god-given days appears to be a myth.)

Interestingly enough, Siri will respond with curiously named days for several of those missing dates including Prophet Sabalan's day, which appears to be a Druze holiday.

Steven Sande and Erica Sadun have been working on the third edition of Talking to Siri, the book that covers all the ins and outs of everyone's favorite digital assistant.

In this article: Gregorian calendar, Julian calendar, Siri, Talking to Siri, United Kingdom
All products recommended by Engadget are selected by our editorial team, independent of our parent company. Some of our stories include affiliate links. If you buy something through one of these links, we may earn an affiliate commission.