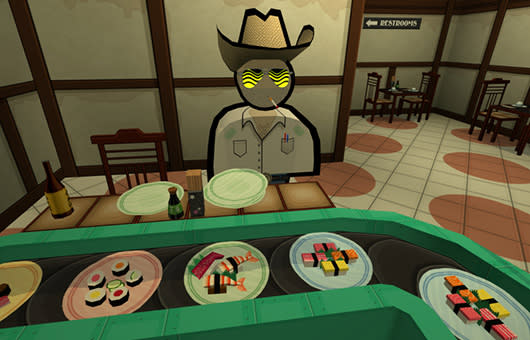 As an adventure game rife with pop cultural spoofs and slapstick comedy, it makes a certain kind of sense that the latest Jazzpunk trailer would be an extended riff on the 1995 Keanu Reeves "classic" Johnny Mnemonic.

In development at Necrophone Games, Jazzpunk is described as "a comedy adventure set in an alternate reality Cold War World, plagued with corporate espionage, CyberCrime, and sentient martinis." Its developers claim that the game is largely based on the spoof comedy films of yesteryear and features open-world exploration. There's no mention of the trailer's ill-fated pocket pigeon, but we're sure that will all be explained when the game makes its February 7 Steam debut.

For more details visit the newly-launched Jazzpunk Steam site. It's worth a look for the "Key Features" list alone.
In this article: adult-swim, adult-swim-games, cyberpunk, jazzpunk, johnny-mnemonic, keanu-reeves, mac, necrophone-games, pc, william-gibson
All products recommended by Engadget are selected by our editorial team, independent of our parent company. Some of our stories include affiliate links. If you buy something through one of these links, we may earn an affiliate commission.