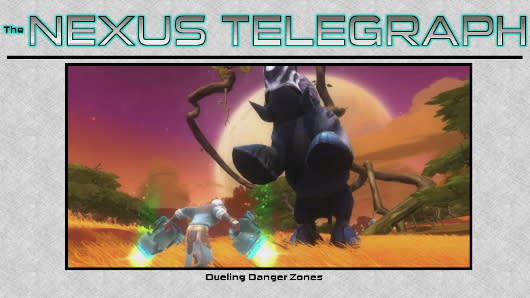 WildStar is launching with active combat, but let's be totally honest about something: The whole telegraph system is not exactly as special now as it might have seemed, say, three years ago.

Guild Wars 2 has active combat. Ditto TERA, ditto DC Universe Online. The Secret World makes use of telegraphs all over the place (which kind of feels like a kludge, but so does most of the game's combat system, so there). Even Final Fantasy XIV -- a game I have noted on many occasions as having a much slower and more tactical combat pace -- makes heavy use of telegraph mechanics. And The Elder Scrolls Online is certainly launching with a more active combat system, to boot.

There's more to WildStar than telegraph markers, though. So it's time to talk about what the game actually does in terms of combat that's interesting and novel. We've been told that the active combat of the game is a big deal, but is it actually revolutionary, an evolution, or just another thing? It's the second one. Yes, I put the answer to that right behind the cut.

"Revolutionary" would imply that we had never seen anything like this, and the fact is that we have. MMOs have been looking for ways to keep players more involved in combat for a long while, with varying degrees of success. Similarly, for WildStar's combat to be just a thing, it would have to be something that was just sort of there, more or less copying the system of another game for all practical purposes. That also isn't the case.

No, what WildStar's combat succeeds in doing is feeling like an evolution of the active combat paradigm that's moving through MMOs at the moment. Calling it the best of the lot would be premature and wrong, but it does some things that are worth noting that its predecessors don't.

See, the whole thing that makes active combat "better" than more traditional combat is the amount of agency players have. In a purely active game, if I'm good enough at dodging, blocking, and attacking, I can take on challenges that should by all rights be unassailable. Conversely, in a stat-focused environment, being good at all of that stuff won't help if I don't have the raw power necessary to power through. It's the difference between Final Fantasy and Super Mario Bros.

TERA was often very good about agency. There were several fights that required parties but could be managed completely solo by someone skilled at dodging and reacting. The BAM fights were my favorite part of the entire game, giving you huge opponents with overwhelming attacks who could be dispatched solo if you were smart. But it was an intricate dance, requiring a lot of awareness and careful timing of your various skills.

WildStar takes that thinking and runs with it. It brings that sort of scenario to every fight. Your opponents aren't pushovers, but neither are they instant death. You have to dodge, weave, and think about your abilities if you want to emerge without a whole lot of extra bruises on your body.

I'm not going to say that this is easy. WildStar's combat has the cadence of a lot of single-player games; you will die several times until you get a feel for the timing of combat. But the net benefit of this is that you also have a far smaller number of deaths that seem to happen entirely by game fiat. No, I'm not talking about games where hugely powerful monsters roam the land and just occasionally happen upon you to one-shot your face; I'm talking about the fact that in some games, spawn times and such combine to just overwhelm and kill you flat.

In WildStar, there almost always seems to be an escape route. Yes, you can get into bad situations, tripping into another group of enemies when you're fighting the last of the prior group on low health. But telegraphs don't just tell you where to dodge; they ensure that the hardest hits don't come at a set cycle. You can see when big stuff is happening. If you're hurting and you need to get away to recover, you can plot a course and at least try to escape.

Many times, I've felt downright fragile. But I've also felt more satisfied in the lower levels as I chew through enemies. When I dispatch a cluster of foes, it's not about having an epic drop but about knowing how to make my abilities work together and unleash destruction. Learning the right way to duck and weave is rewarding, and it feels worthwhile.

That's not to say that it's perfect. You do have to learn how to duck and weave, and the process of learning is sometimes frustrating. Indeed, I'm thinking that the game as a whole is going to reward something less than constant all-out offense, just because of the number of effects peppering the ground more or less constantly. The combat is also tuned to be a bit too fast, with very low margin for error in places. I've never felt as though I got hit by something that I was out of, but I have sometimes felt that my window to get out of something wasn't long enough.

It's not bold new ground that has never been seen before, definitely. But it is interesting. It takes some fairly well-worn trails and goes in different directions, producing a combat system that's a lot of fun and offers some unique thrills. Expect to see it keep getting tweaked, but I think it steps into the active combat arena quite nicely, even if it's not the first one in.

Feedback, as always, is welcome in both the comments and via mail to eliot@massively.com. Next week, I'm going to discuss WildStar's biggest competitor: itself.

In this article: action-combat, active-combat, active-combat-comparisons, carbine, carbine-studios, column, combat, featured, game-mechanics, mechanics, mmo-industry, ncsoft, nexus, nexus-telegraph, opinion, sandpark, sci-fantasy, sci-fi, the-nexus-telegraph, wildstar
All products recommended by Engadget are selected by our editorial team, independent of our parent company. Some of our stories include affiliate links. If you buy something through one of these links, we may earn an affiliate commission.