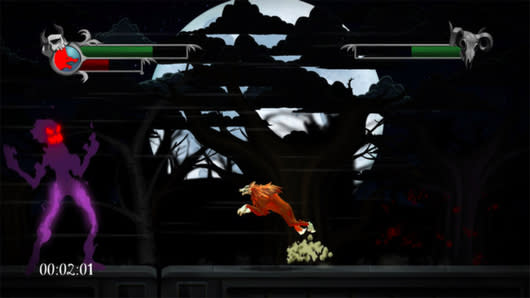 Midnight City, Majesco's indie publishing label, has announced launch timetables for two of its upcoming games. Blood of the Werewolf, which launched on Steam last year, will stalk Xbox 360 and PS3 sometime between April and the end of June, while Avalanche 2: Super Avalanche will hit Steam this spring.

Blood of the Werewolf, a 2D platforming game about a mother (and werewolf) seeking revenge for her slain husband and abducted child, comes to consoles with some additional content. Endless Challenge mode provides a non-stop parade of procedurally generated rooms to overcome. PC owners can look forward to this content in a free update after the console versions launch.

Avalanche 2: Super Avalanche is the sequel to Chris Peterson's original free-to-play Flash game, Avalanche, which has been played more than 60 million times. Avalanche 2 will continue the platform-climbing tradition of its predecessor on Steam, challenging players to see how high their marshmallow avatar can climb. A pool of deadly liquid is ever-encroaching from the bottom of the screen, while the game dumps blocks and other stepping stones.

Blood of the Werewolf is currently available for $10 on PC through Steam. It was given the Steam Greenlight in October of last year and launched just before Halloween. Avalanche 2: Super Avalanche is currently in beta testing, which you can buy into now for $5.
Show full PR text
MIDNIGHT CITY ANNOUNCES NEXT TWO INDIE RELEASES

Blood of the Werewolf Transforms onto Consoles with
Avalanche 2: Super Avalanche Bouncing onto Steam in Spring 2014

Edison, NJ – January 28, 2014 – Midnight City, the recently founded indie label of Majesco Entertainment Company (NASDAQ: COOL), an innovative provider of games for the mass market, is proud to announce two more indie releases in the pipeline. Beast Game's indie fan-favorite Avalanche 2: Super Avalanche will be fully optimized for Steam in late Q1, followed by an updated Blood of the Werewolf expanding to the Xbox Live online entertainment network for the Xbox 360 games and entertainment system from Microsoft and PlayStation®Network simultaneously in Q2. Tune in to Scientifically Proven's livestream on January 31st to get a special preview of the game and meet the team!

Based on the wildly popular flash game Avalanche, Beast Games' Avalanche 2: Super Avalanche builds on the core platform-climbing gameplay with a host of new features, adding more dimension than ever before. Players start out as a bouncy marshmallow character compelled upward by a rising tide of liquid, while a constant stream of procedurally generated items and breakable blocks fall from the sky. What starts as a simple climb soon becomes a challenge to survive as blocks can crush the marshmallow heroes if they don't act fast. To aid players in their altitude-driven quest, unlock up to four item slots for over 70,000 combinations of special power-ups that help 'mallows jump higher, move faster, double jump and more! On the ascent, keep an eye out for special chests to break and discover bonuses and valuable coins which can be used to purchase customizations and abilities. Randomly generated bosses spawn at specific altitudes on special platforms, punctuating the heart-pumping climb at critical intervals. Avalanche 2: Super Avalanche is planned to release on Steam in late Q1 2014.

Released to critical acclaim this last Halloween on Steam, Blood of the Werewolf is ready to transform onto consoles with fresh content for its debut. New game mode 'Endless Challenge' pits players against procedurally generated, increasingly difficult gauntlets for limitless runs to sharpen the player's skills and compete on leaderboards. For the uninitiated, Blood of the Werewolf spins the tale of Selena, a loving wife, mother and unstoppable werewolf who races against time to save her son from the evil Victor Frankenstein. Fueled by vengeance at the sight of her murdered husband, Selena sets off on a blood-soaked rescue mission that spans 10 levels of platforming action with five intense boss arenas. Dynamic gameplay focuses on lightning-quick transformations from human to werewolf form by light of the moon. Along the way Selena faces off with a reimagined cast of monster-movie icons including The Creature, Jekyll & Hyde, The Mummy, Dracula and Frankenstein's Monster. Adding to the challenge, players must seek out secret rooms and hidden areas scattered throughout the game to collect powerups for their crossbow, werewolf powers and health upgrades. Blood of the Werewolf is a thrilling platformer that pays homage to the classics of days past and reignites the passion for mastery that inspired one of the greatest eras in video games. Blood of the Werewolf is planned to release on the Xbox Live online entertainment network for the Xbox 360 games and entertainment system from Microsoft and PlayStation® Network simultaneously in Q2 2014.

As a special thanks to those who purchased Blood of the Werewolf on Steam, Scientifically Proven will release a free update with challenge room content, post-console release.
In this article: avalanche-2, avalanche-2-super-avalanche, blood-of-the-werewolf, microsoft, midnight-city, pc, playstation, ps3, xbox
All products recommended by Engadget are selected by our editorial team, independent of our parent company. Some of our stories include affiliate links. If you buy something through one of these links, we may earn an affiliate commission.