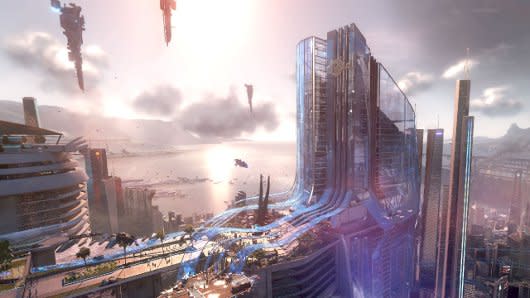 Killzone: Shadow Fall, the latest entry in Guerrilla Games' series about shooting anyone with glowing red eyes, has sold over 2.1 million copies worldwide. That figure accounts for physical Blu-ray discs and downloads sold through the PlayStation Store.

The 2.1 million milestone was achieved on January 15, Sony says. To put that into perspective, Killzone 2 took nearly seven weeks to reach one million in sales. Though we're missing exact figures, we know Killzone 3 debuted at the number eight spot in the February 2011 NPD charts.

Killzone: Shadow Fall is set on the planet Vekta, where both the Helghan and the ISA reside. Players take up the role of Lucas Kellan, a covert assassin and espionage agent. Kellan works behind the scenes under the orders of ISA Shadow Marshal director Thomas Sinclair, a man who seemingly views the Helghan as animals more than the gun fodder our review suggests they are.
Show full PR text
Sales Of PlayStation®4 (PS4™) Exclusive Software Title, KILLZONE™ SHADOW FALL, Exceed 2.1 Million Units Worldwide

TOKYO, Jan. 29, 2014 /PRNewswire/ -- Sony Computer Entertainment Inc. (SCE) today announced that the global sales of the PlayStation®4 (PS4™) exclusive title, KILLZONE™ SHADOW FALL, exceeded 2.1 million units*1 as of January 15, 2014. The latest installment in the award-winning KILLZONE™ franchise delivers a compelling storyline along with rich gaming experiences. The title has received significant acclaim from users worldwide, and has made a great contribution to the expansion of the PS4 platform.

"I am thrilled that so many users have been enjoying KILLZONE SHADOW FALL since the launch of PS4," said Shuhei Yoshida, President of Sony Computer Entertainment Worldwide Studios (SCE WWS). "This title fully embraces the creativity of the development team at Guerrilla Games*2 based in the Netherlands, and is a great representation of what SCE WWS has to offer. SCE will continue to deliver exciting software titles, and is currently developing more than 30 titles including DRIVECLUB™, inFAMOUS Second Son™ and The Order: 1886™, which offer entertainment experiences only possible on PS4."

The KILLZONE series, exclusive to PlayStation® platforms, covers the conflicts between the Interplanetary Strategic Alliance (ISA) and the Helghast Empire. KILLZONE SHADOW FALL introduces a new chapter of the saga on the ISA's stronghold, Planet Vekta. Play as Lucas Kellan, an elite soldier/intelligence officer of the Vektan Government who faces various challenges to stop the terrorist group Black Hand from destroying the planet. Guerrilla Games has continued to release updates for the title after its launch in North America and Europe, such as game patches which offer better support on both single and multiplayer modes. The team is also currently working hard on a multiplayer expansion pack with additional features, as well as preparing two FREE multiplayer maps for the KILLZONE community. The release dates for the DLC will be announced shortly.

SCE will continuously expand the world of PS4 through the introduction of attractive software titles and network services.

*1 Includes both Blu-ray Disc™ sell-in quantities and download version sales on PlayStation®Store.
*2 A studio under SCE WWS which develops the KILLZONE franchise.

"PlayStation" is a registered trademark of Sony Computer Entertainment Inc.. PS4 is a trademark of the same company.
Blu-ray Disc is a trademark of the Blu-ray Disc Association.
All other trademarks are property of their respective owners.
In this article: guerrilla-games, playstation, ps4, sales
All products recommended by Engadget are selected by our editorial team, independent of our parent company. Some of our stories include affiliate links. If you buy something through one of these links, we may earn an affiliate commission.