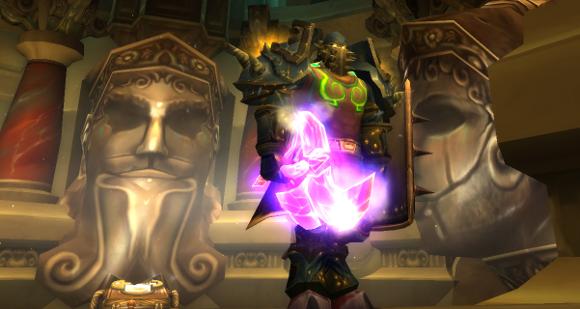 The 'catch up' dungeon was a commonplace design in Wrath of the Lich King and Cataclysm, one that's fallen out of favor in Mists of Pandaria to be replaced by the Timeless Isle and Raid Finder. It's understandable that this should be the case - designing a dungeon or dungeons is a lot of work, and it means other content (like, say, an open world zone like the Timeless Isle) won't be delivered. And as a catch up mechanic, the Timeless Isle is in many ways superior to a five man dungeon. Art assets were reused and gear randomized - you get a piece for your class and spec, but it's not necessarily ideal for them, so there's benefit to keep farming the zone. Furthermore, there's an upgrade mechanic in place (Burdens of Eternity) that will allow you to make pieces that are much closer in quality to current raiding, giving you even more incentive to keep running it.

However, I'm much more a fan of the catch up dungeon. As much as I like exploring on the Timeless Isle, there comes a time when you've explored all that you can, and the Isle stops having any use for you. Even for a dedicated alt-maven, it's lack of weapons (yes, I know you can get some weapons, but even after the upgrade in 5.4.7 they won't be very good) at a reasonable cost makes it less appealing to me. The Timeless Isle trades the random drop factor of catch up dungeons for near certainty - you will get every piece you want, eventually. It's an efficient and workable system and I dislike it. In comparison to Wrath and Cataclysm it lacks in the following areas: Now, this isn't to say I hated the Timeless Isle, or the Battlefield Barrens that went before it. I didn't and don't. However, I do think that in the growth of alternate forms of content we saw in Mists (which I generally think was a good thing) too often the choice between a dungeon and something else went the way of something else - new scenarios, heroic scenarios, world content, these all came out at the seeming expense of a catch up dungeon. Even The Burning Crusade had a catch up five man at the end, the Magister's Terrace, widely regarded as one of the best and (at the time) hardest dungeons. Wrath actually had four catch up dungeons - the Trial of the Champion in the 3.2 patch, followed by the ICC dungeons in 3.3, and keep in mind that 3.2 also launched with a raid and a lot of quest and world content. Cataclysm had five catch up dungeons in total, the two Zul'roics and the three Hour of Twilight dungeons.

In the modern game with so many choices, why do dungeons matter? Because for some players, running a dungeon with four others is the heart of the game - it's a style of play that is rooted in the genre of role playing games, something that goes back to the pen and paper roots of our experience. For other players, small dungeon runs are the most time efficient use of their limited gameplay - running a Raid Finder group can take hours that they just don't have, whereas running a few dungeons will leave them with time for other activities they may wish to engage in. One argument I've seen from players who stopped playing is that they only have a couple of hours a night to play, and committing to an LFR is basically their entire night - if the group goes south, that feels like a night of gaming wasted. Dungeons offer these players content that is still group play, but at a time and commitment scale they can easily afford - if a dungeon run collapses, it's much less of a disaster for these players. Finally, with the advent of Challenge Modes, a new type of player experience was created... and since then, it has languished without any new content to support it. If new dungeons were developed, they also become new Challenge Modes to reward that style of play with new content.

Raids are fun, open world content is fun, scenarios and heroic scenarios are fun. And I understand that each requires time and resources to develop, and I'm not calling for the removal of Raid Finder in favor of dungeons. What I am calling for is some focus put into dungeon design, and that it be continued for the life of the next expansion. It may be too late for Mists of Pandaria (although I still believe we require a final patch with some content that wraps up loose ends) but man, going forward the dungeon needs to come back to a prominent role in the design of the game, and catch up dungeons need to drop in future patches.
In this article: cath-up-dungeons, content, group-content, time-reward
All products recommended by Engadget are selected by our editorial team, independent of our parent company. Some of our stories include affiliate links. If you buy something through one of these links, we may earn an affiliate commission.