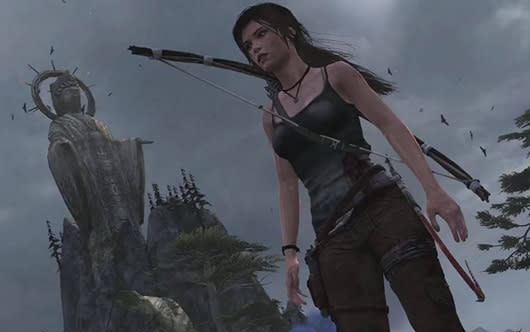 Now that Tomb Raider has made its way to the PlayStation 4 and Xbox One, the techie aesthetics experts at Digital Foundry have used their bag of tools to compare the graphics found in these new versions of the game. End result: The PlayStation 4 release pulls ahead ever so slightly.

Though it's been known that the PlayStation 4's Tomb Raider: Definitive Edition can reach 60 frames per second (though not at all times) while the Xbox One game runs slower, Digital Foundry has also discovered that certain cutscenes in the Xbox One game are reduced to 900p resolution. Oddly, this resolution change only applies to those select vignettes, while the game itself maintains its high-definition 1080p visuals.

Further, Digital Foundry finds certain graphical bells and whistles lacking in the Xbox One game, saying "alpha-based effects in certain areas give the appearance of rendering at half resolution - though other examples do look much cleaner. We also see a lower-quality depth of field in cut-scenes, and reduced levels of anisotropic filtering on artwork during gameplay. Curiously, there are also a few lower-resolution textures in places on Xbox One, but this seems to be down to a bug (perhaps on level of detail transitions) as opposed to a conscious downgrade."

While Digital Foundry ranks the PlayStation 4 game above the Xbox One version for pure graphical splendor, the comparison also notes that neither of the next-generation games runs as well as the original, 2013 release of Tomb Raider on a modern gaming PC. Both of the console games, however, feature more built-in content and an improved 3D model for Lara Croft.
In this article: Crystal-Dynamics, digital-foundry, graphics, lara-croft, microsoft, pc, playstation, ps4, square-enix, technology, tomb-raider-2011, tomb-raider-2012, tomb-raider-2013, xbox-one
All products recommended by Engadget are selected by our editorial team, independent of our parent company. Some of our stories include affiliate links. If you buy something through one of these links, we may earn an affiliate commission.