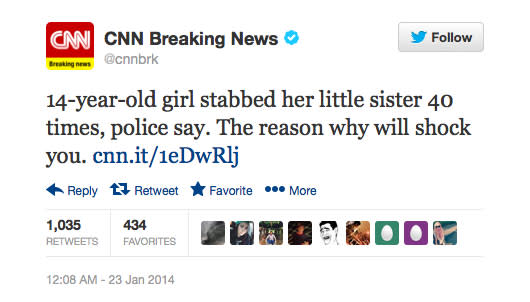 We've known for sometime that Twitter is looking to make a move in the news game, but what that would look like was still unclear. Today, the blue bird's intentions are starting to look a bit more concrete, with the announcement of Dataminr for News, a tool that pinpoints and alerts journalists of breaking news before every Joe with a dot com is tweeting about it. The tool, created in partnership with NY startup Dataminr, uses machine-learning algorithms to identify big and reliable stories and alert journalists via email, mobile alerts and other means. It will also provide detailed information about the origins and sources behind the information. According to The Verge, CNN has used Dataminr tools for months and is already seeing some payoff: It claims to produce at least two stories a day sourced from the service.

The new initiative feeds into the "me first" media culture that has seen hoaxes rise to the top of Twitter as quickly as real breaking news stories. However, Dataminr claims that its algorithms cut through the bull shit by looking beyond the first tweet to find "corroborating sources on the ground" among other factors. According to TechCrunch, Dataminr CEO Ted Bailey said Dataminr for News will become available to all journalists for an undisclosed price later this year.

In this article: breaking news, cnn, dataminr, dataminr for news, journalism, media, news, news gathering, twitter
All products recommended by Engadget are selected by our editorial team, independent of our parent company. Some of our stories include affiliate links. If you buy something through one of these links, we may earn an affiliate commission.