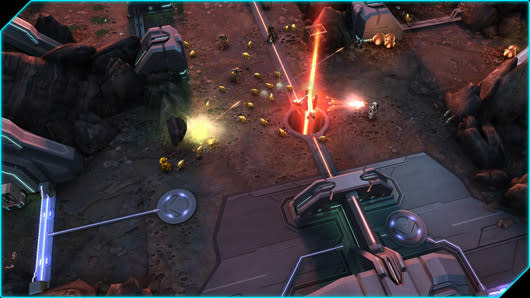 343 Industries and Vanguard Entertainment's twin-stick shooter spinoff Halo: Spartan Assault will launch as a downloadable game for the Xbox 360 tomorrow, following up on previous releases for the Xbox One, Windows 8, and Windows Phone.

Played from an overhead perspective, Spartan Assault features an array of missions that players can tackle alone or with friends in an online co-op mode. The Xbox 360 version of Spartan Assault is bundled with the "Operation Hydra" expansion, which adds new weapons and an additional five levels on top of the game's 25 campaign missions.

The Xbox 360 version of Halo: Spartan Assault will be priced at $14.99 when it hits the Xbox Live Marketplace tomorrow. Players who purchased the Windows 8 or Windows Phone versions of the game before December 15 last year can get the Xbox 360 edition at a discounted rate of $4.99.
In this article: 343-industries, halo, halo-spartan-assault, microsoft, release-date, vanguard-entertainment, xbox
All products recommended by Engadget are selected by our editorial team, independent of our parent company. Some of our stories include affiliate links. If you buy something through one of these links, we may earn an affiliate commission.