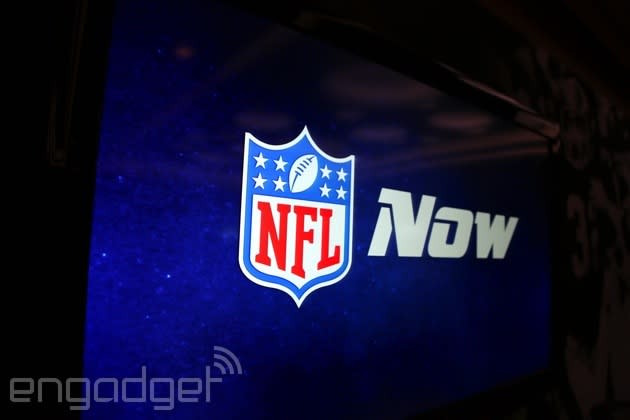 Super Bowl XLVIII is just around the corner, and the NFL's taking advantage of the week leading up to it by using it as a platform to reveal its next venture: NFL Now. Today, at a press event in New York City, the National Football League introduced a newly created digital network, dubbed NFL Now, which it says will focus on delivering a "personalized stream of content" to fans of the sport worldwide. While the online service won't be streaming football games live -- not at the time of launch, at least -- it will have full on-demand clashes to offer, as well as highlights and other content produced by teams across the league. In addition to all of this, there's also going to be an abundance of extra video from across other NFL properties, including NFL.com, NFL Network and NFL Films. And, better yet, it will be free.

However, don't expect Now to act only as a hub for all that aforementioned stuff: The NFL says we can anticipate a ton of original programming to be available as well -- though it hasn't gone into detail about what type exactly. Once it actually gets rolling, we're told the user experience on NFL Now is set to be extremely personalized and easily customizable. For example, users can select from a number of preferences, like favorite team and fantasy players, and NFL Now will show a stream of content based on those choices. "Eventually, no two users should get the same experience on NFL Now," a league representative said to us. NFL Now is set to have applications on iOS, Android, Windows Phone 8, Xbox One and "across select consoles and streaming devices." For the hardcore NFL enthusiasts, there will be Now Plus, a subscription-based account that's going to provide access to "premium video content and features." Naturally, you'll have to pay a monthly fee -- no word yet on how much the cost of that will be. Commissioner Roger Goodell says the NFL's overall approach toward media "has been a key component in the growth and success of the NFL over the past 50 years." "We fully expect NFL Now to be a big part of that initiative in the future."

The revelation of NFL Now comes shortly after WWE announced its very own new-age network, signaling that these entities are viewing the internet as a valuable medium to deliver programming on. It's no longer just about sitting on the couch, across from a cable box and a 50-inch TV. Will Now turn out to be a good call from the National Football League? Well, that's yet to be determined -- but we'll begin to find out in July, which is when the service is due to be officially launched.

In this article: digital network, Football, hands-on, hdpostcross, National Football League, NFL, NFL Network, NFL Now, Sports
All products recommended by Engadget are selected by our editorial team, independent of our parent company. Some of our stories include affiliate links. If you buy something through one of these links, we may earn an affiliate commission.