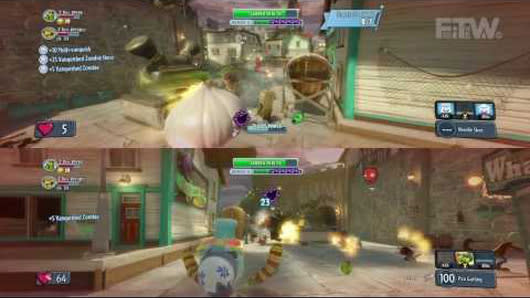 Plants Vs Zombies: Garden Warfare producer Brian Lindley details the upcoming squad-based shooter's split-screen mode in the newly-launched video above, revealing that local cooperative play is exclusive to the Xbox One version of the game.

In Garden Warfare's co-op mode, players team up to defend a garden from an endless horde of invading zombies. Players can choose among multiple playable classes, giving them a wide variety of ability combinations and strategic options on the battlefield. The Xbox One version of Garden Warfare also boasts an exclusive Boss mode, which allows a third player to distribute power-ups during gameplay via Kinect or SmartGlass.

Plants vs. Zombies: Garden Warfare is due to hit the Xbox 360 and Xbox One in February.
In this article: co-op, ea, electronic-arts, microsoft, multiplayer, plants-vs-zombies-garden-warfare, popcap, split-screen, xbox-one
All products recommended by Engadget are selected by our editorial team, independent of our parent company. Some of our stories include affiliate links. If you buy something through one of these links, we may earn an affiliate commission.