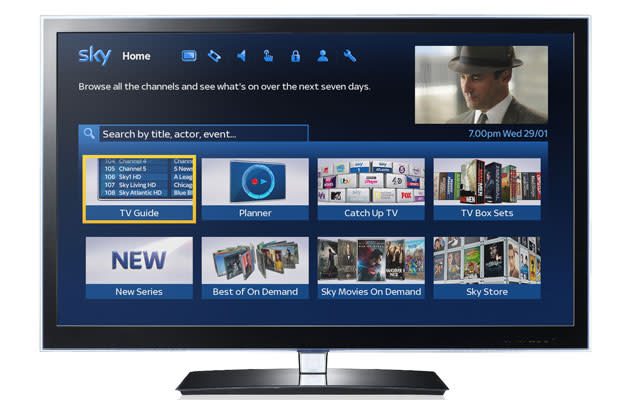 It's a big day for Sky as the outfit announces that it's keeping hold of its premium drama jewels for at least six more years. The broadcaster has extended its exclusive deal with HBO, with first-run rights to shows like Game of Thrones, Boardwalk Empire and Girls staying on the network until 2020. The pact also bolsters the co-production agreement signed at the time, so expect more co-funded dramas like Strike Back to appear on your screens in the near future. At the same time, Sky is celebrating the fact that it controls the UK's biggest connected-TV platform, with 4.4 million on-demand customers. As such, it's planning to revamp the Sky HD electronic program guide to give on-demand content equal standing with live TV, just like the picture above. Meanwhile, the broadcaster's sports arm, still smarting from the loss of the Champions League, has snagged the exclusive rights to plenty of other events, including England Cricket, the Lions tour of New Zealand and Super League matches until 2021.

In this article: Business, Deal, Game of Thrones, HBO, hdpostcross, Sky, Sport, UK
All products recommended by Engadget are selected by our editorial team, independent of our parent company. Some of our stories include affiliate links. If you buy something through one of these links, we may earn an affiliate commission.