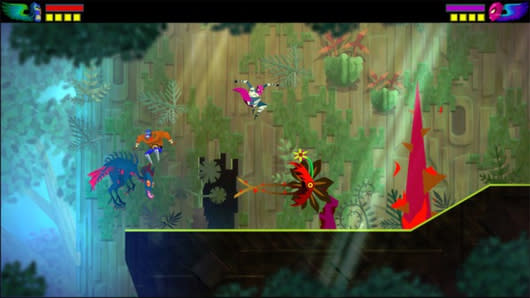 Guacamelee! Gold Edition is Steam's daily deal today. Until 10am PT on Sunday, February 2, you can grab Drinkbox Studios' charming Lucha Libre-inspired platformer for only $3.74. A bundle including the game's delightful soundtrack is available for $5.

In our review, based on the original PS3 and PS Vita version, we called Guacamelee a "luchadorable" good time. "The clumsy evolution of combat aside, I'd heartily recommend Guacamelee – once for its devilish difficulty, again for its luchadorable charm, and one last time for its even-handed treatment of the lowly video game chicken."
In this article: drinkbox-studios, guacamelee, pc, steam
All products recommended by Engadget are selected by our editorial team, independent of our parent company. Some of our stories include affiliate links. If you buy something through one of these links, we may earn an affiliate commission.