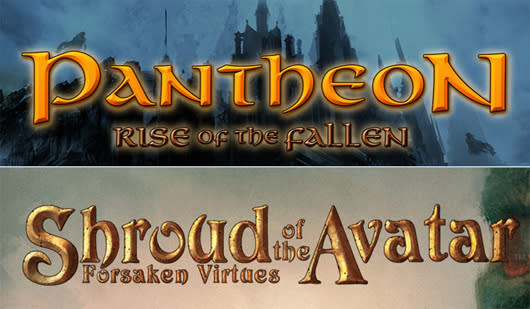 If you've supported the crowdfunding efforts of either Richard Garriott's Shroud of the Avatar or Brad McQuaid's Pantheon: Rise of the Fallen, the devs have an offer for you: back both games and get a special cross-game reward. Starting today, fans will see the cross-promotion pledge tiers for both games, Pantheon's on its Kickstarter and SoA's on its website. The reward is a cloak in each game emblazoned with the symbol of the other game.

The cloak reward -- which symbolizes community between players, developers, and even games -- is just the beginning of the collaboration between Visionary Realms and Portalarium. McQuaid stated, "The evolution of how MMOs are made is happening right now. We're getting back to having the gaming community deeply involved in how the games are not only funded, but designed. A collaboration like this one only makes sense to further strengthen that growing community that involves not just the players and backers, but the developers as well."

[Source: Visionary Realms press release]
In this article: avatar, brad-mcquaid, crowdfunding, fantasy, kickstarter, lord-british, pantheon, pantheon-rise-of-the-fallen, pantheon-rotf, protf, richard-garriott, rise-of-the-fallen, rotf, shroud, shroud-of-the-avatar, SOTA, visionary-realms
All products recommended by Engadget are selected by our editorial team, independent of our parent company. Some of our stories include affiliate links. If you buy something through one of these links, we may earn an affiliate commission.